The Roundup – Rolling with the Punches

As detailed in my previous post, I only had 2.5 points after 6 rounds. I had played some uninspired and bad chess, so in round 7, I was hoping to stop the bleeding and just play some good moves.

I was paired as black against IM Justin Sarkar. The game followed the main line Slav Defense,  although Justin employed a rare, but very aggressive line, with 12.f4, trying to crowd Black’s light-squared bishop. The following position was reached after White played 15.0-0 – he’s offering the e4-pawn with 15…Bxc3 16.bxc3 Bxe4, but then 17.Ba3 comes and Black’s king is stuck in the center.

Black would be a pawn up, but the king safety issue disuaded me from playing this. Thus, I played 15…f6, making room for my light-squared bishop on f7 (if 16.f5 exf5 17.exf5 Bf7, and Black’s pawn structure is more compact). Justin continued to offer the e4-pawn with 16.Be3, and this time, I decided to snatch it.

After 16.Be3 Bxc3 17.bxc3 Bxe4 18.c4 0-0 19.Qb3, White had definite compensation, but it was always only barely enough to scrape out a draw. Black kept his extra pawn, but in order to put out White’s counterplay, too many pieces were exchanged and a drawn rook and pawn endgame arose. I was not especially pleased with this game because I didn’t win, but I was happy that I at least played some good chess for once.

Now back to an even score (4.0/8), I had the black pieces against IM Lev Milman. Even though he doesn’t play as much as he did before, Lev had high hopes when he came to this event – his previous two GM norms were scored in December in California! However, this tournament had not been going his way after a horrible blunder in round 2 threw away a game in one move. Still, he was fighting in every game and I knew he would prepare something new for me.

The opening was a French Tarrasch, following my earlier game with Esserman until essentially move 12, where Lev chose a very different plan with 12.g3 and 13.Bf4 instead of 12.Nc3 and 13.Bd2. This is a plan that has become popular again recently, trying to force off Black’s good bishop and accentuate the weakness of the backward e6-pawn and the e5-square. Not usually a 3…Nf6 player against the Tarrasch anymore, I couldn’t remember much theory (and I had prepared exclusively for 3.Nc3, thinking he’d go for a main-line Winawer) and played 12.g3 0-0 13.Bf4 Ng4. Lev then blitzed out 14.Rc1, reaching the following position: 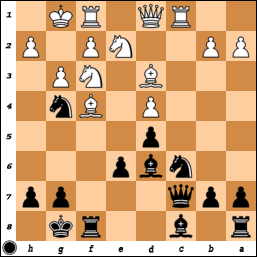 The speed with which he had been playing so far led me to believe he had prepared this line, so what did he have planned on the exchange sacrifice on f4? After a long think, I decided that it was the principled approach after having already played 13…Ng4  (otherwise, 13…Bd7 is a normal move when Black is doing ok). I didn’t see any forced loss afterwards either, so although I was somewhat conflicted about walking into his preparation, I went for it and played 14…Bxf4 15.Nxf4 Rxf4 16.gxf4 Qxf4. Black has one pawn and a knight for the rook, and to be honest, I still thought White might enjoy a tiny advantage with correct play.

As compared to my game with Friedel in round 6, the nominal material difference is the same, but there are some other differences – for one, the presence of two extra pairs of minor pieces should help Black here because the influence of the rooks is slightly diminished (in the Friedel game, amongst other things, the lack of other minor pieces left some files open, while allowed White to trade off a pair of rooks); secondly, Black is making immediate threats here against the white king, the f3-knight, and the d4-pawn (in the Friedel game, the knight on e4 bought Black time to bring out the rest of his pieces, although that could have been made more problematic with the simple gxf5 instead of g5?); and finally, in this position, Black’s king can almost be tucked away safely on h7 (whereas in the Friedel game, White’s pawn on g5 meant that Black’s king was never quite safe and had to take a walk out to g4 to introduced winning chances later in the game). All in all, Black has compensation in both positions, but I would think Black is closer to full compensation in this position than in that one.

As a matter of fact, we were still following Lev’s preparation with the computer which indicated that White was better. However, after getting his move order mixed up, he had to jettison a second pawn, when things become rather problematic for him. After 17.Bb5 (Black was threatening 17…Nxd4) Bd7 18.Rc3 Rf8 19.Qd2 Qd6 20.Ne5 Ncxe5 21.dxe5 Nxe5 22.Bxd7, the following position was reached: 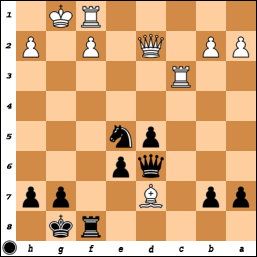 Now Black has a decision – how to take back on d7? If Knight takes, then the knight is headed for the e4-square, but White might have counterplay. If Queen takes, the immediate threat of …Nf3+ almost forces f2-f4, when the f-pawn is weaker and the rooks might have to be stuck to its defense. Thus, I played 22…Qxd7. After 23.f4 Ng6 24.Qd4, I played 24…Qd6.

Again, we can make a comparison with the Friedel game – now the piece allotment is the same (black has a knight and 2 pawns for the rook, with no other minor pieces on the board), but there are still some differences: (1) Black doesn’t have as strong a passed pawn as Friedel did; (2) Black’s king is not as exposed here because White has no cramping pawn on g5; and (3) White’s rooks are tied to the defense of a pawn rather than being able to invade on the 7th or 8th ranks (it’s almost always useful to trade rooks when you are the side that is up the exchange). Thus, I still think this position is better for Black than in the Friedel game, although there, Black certainly had the better chances until the rooks came off.

My plan after 24….Qd6 was simple – White can almost never afford to give me the f4-pawn because his king would then lack any cover and Black would gain two connected passed pawns in the center. Thus, with 3 attackers, White would have to keep his queen and two rooks tied to its defense. Black could then slowly improve his position: the plan is to bring his rook to the f6-square (from where it can swing to g6 to attack white’s king), his knight to h4 (where it secures the f5-square and forces White’s rook to the more passive 2nd rank), a his king to h7, where it is safe from checks on the 7th and 8th rank. Then, Black needs to get some light square control along the long diagonal, which means kicking the queen from d4 (with …Nf5), playing …d5-d4, and then a check on c6 with the queen. If White’s king is on g1, then …Rg6+ will finish him, while if he interposes with a rook, then the d4-pawn secures the e3-square for Black’s knight.

All this is rather fanciful and presupposes no active play from White, but that was what I was thinking at the time. After 31…Qb4, I had managed to achieve a couple of those aims – White’s rooks are passive and I have central light squares from which to attack White’s king.

With consecutive wins under my belt, I was rewarded with the black pieces in the final round against GM Giorgi Kacheishvili. He was leading the even with 7/9, and a draw would secure at least a tie for first, while a win would guarantee clear first place. I was a little annoyed that I had been given my 6th black in 10 games, but the pairings were what they were.

The opening transposed from an Enligsh to a Caro-Kann right away, an opening I never play (even in blitz). It was slightly unpleasant as while Giorgi doesn’t usually play the white side, he plays the black side all the time! However, he was not able to find a good plan and after 16.Nc3-e4 (the only move), I was faced with a big decision – should I take on e4 or d3 first? 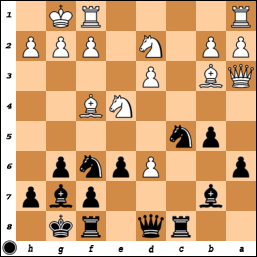 Black is clearly better, but his extra pawn is an e-pawn, and it’s tough to take away some of White’s piece activity. However, I had burned up too much of the clock, and after missing a simple trick, White forced a 3-fold repetition in a pawn-down endgame.

Thus, I finished with 5.5/10. I came back from my horrible start to salvage something in the last 4 games – I played some good chess, and limited my loss to about 4 or 5 FIDE rating points. I also finished on a relatively good note heading into my next tournament in India (the Parsvnath Open, from Jan 11 to Jan 19).

This entry was posted in Uncategorized and tagged Berkeley Masters, chess. Bookmark the permalink.

2 responses to “The Roundup – Rolling with the Punches”