A Return to Normalcy in Basque Country

Apologies for not posting for a few days, but as I don´t have internet access in my hotel in San Sebastian, it´s tough to spend enough time at an internet cafe. Between the two tournaments, I spent a couple days in Bilbao, walking around the city and going to the Guggenheim Museum there.

San Sebastian is a small city in the northern part of Spain, in Basque Country or Pais Vasco. It´s been raining here most of the time, but in the summer, it´s a big tourist destination for its beaches.

The tournament has gone by pretty quickly so far, with 6 of the 9 rounds in the books. I have 4.5/6. I have 3 wins and 3 draws, with a pair of the draws coming against lower rated players. In the 6th round, I drew against GM Pablo San Segundo.

The 2nd round draw was a bit weird, as I was well ahead on the clock and my position was always a little better, but I could never quite put my opponent away. In the 3rd round, I had the black pieces against Vaibhav Suri, a young Indian player (about 11 years old and 2250 FIDE). The 3rd round was slightly disappointing for different reasons, as my opponent managed to repeat about 18 moves of theory in a sideline and then secured a rather sterile equal position. Actually, Jesse Kraai and I had looked at this exact position some time earlier, but I had played the line hoping that since I had been playing other lines since then, I would catch him off-guard as I didn´t want to test his theoretical knowledge (he is GM Delchev´s student):

In the 5th round, I had the black pieces against WGM Anna Rudolf of Hungary. Actually her repertoire was the same as Vaibhav Suri from the 3rd round, so I decided to play my other option, 1…e5. The game was a Two Knights with 4.d3. After 14.Qe2, we reached the following position:

If Black quietly defends his pawn on e5, then White will play 15.Ne4 and set up a nice blockade of Black´s center. Thus, I played 14…Nf6, and my opponent replied with 15.Qxe5 right away (strangely enough, after the game, she said she thought she had looked at this position before, but I had spent 40 minutes already and when I looked it up afterwards, we had left theory a few moves back – the move is also not very good). I played 15…Ng4, and now White has trouble with her queen and queenside development. After 16.Qe1 Bd6, she played 17.Nf3, but this allows a small tactic: 17…Nxh2! 18.Nxh2 Bxh2+ 19.Kxh2 Qh4+ 20.Kg1 Qxc4. I soon rounded up the d5-pawn and was a pawn to the good. Rather than defend the opposite colored bishop middlegame passively, she played g2-g4? at some point, and we reached the following position after 30.Qd3: 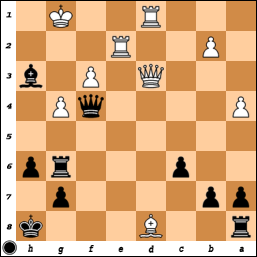 The tournament is currently being led by GM Pablo LaFuente, of Argentina. We had played many years ago, when we tied for first in the Pan-American Under-14 Championships. That game ended in a draw, and we ended up tying for first place – luckily, I managed to get first on tiebreaks. Now he lives in Spain and plays chess, and is doing quite a good job of it here with 5.5/6.