He Who Has Fewer Pieces at the End can Still Draw

In my last post, I summarized a couple of my important wins from the tournament. After the win against Adina-Maria Hamdouchi in the 4th round, I got the black pieces against her husband, top seed GM Hicham Hamdouchi. Even though I didn’t win this game, it was probably my best game of the event because of the fight I had to put up to get even half a point. The opening was a Ruy Lopez, and in the following position, I had just played 19…d6-d5:

Surprised by a relative sideline, I decided to try and sacrifice my b5-pawn in the hopes of getting some active piece play in return. By the time I played …d5, I had already seen White’s upcoming maneuver, but I still had to get rid of my backward d-pawn and try to open things up for my pieces.

After 20.exd5 Qxd5 21.Nb1!, it looks like Black can’t take on b5 yet because of 22.Ba4, skewering Queen and Rook. Actually, Black can consider it, because after 22.Ba4, he can throw in 22…Bxf3! 23.gxf3 (White would like to take back with his queen, but then the Ba4 hangs, while if he takes on b5, Black takes on d1 and will have two pieces for the rook) Qb8 24.Bxe8 Qxe8 with some compensation. I considered this, but decided that it was a bit too speculative with White’s b2-pawn still around. For what it’s worth, Rybka considers this best for Black.

Instead, I played 21…Qb7, keeping the Q + B battery on the long diagonal. Now Black is planning 22…e4 and 23…e3, prying open the kingside. He played 22.Be3 to stop the e-pawn from making its way down the board, reaching the following diagram: 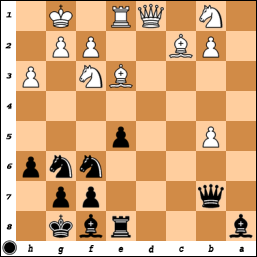 After 22…Qxb5 23.Ba4 Qxb2 24.Bxe8 Nxe8, we reached an interesting position that I considered to provide me with excellent drawing chances in a practical game. In a correspondence game, that evaluation might change. =)

Queens were quickly exchanged, reaching a complex endgame that I don’t think I’ve seen anything like in my own games at least. Hicham had a R + B + 2N + 3p against my 2B + 2N + 4p, with all the pawns being one side of the board. I had counted on this factor to give me good drawing chances, as cutting the board down to one half would help nullify some of his rook’s range. Still, with only about 5 minutes to play this endgame (with a 30-second increment), it wasn’t going to be a piece of cake. After a lot of maneuvering, we reached the following position where he had just played 40.Nc4-e3:

I had been avoiding piece exchanges when I could, but at this point, I can’t really hold him off forever. However, I thought I sensed an opportunity here to help myself out by removing all his knights. I played 40…Nxe3 41.Bxe3 Bxd2!?, and the second of these exchanges visibly surprised him. The reasoning behind this decision was partly practical (I didn’t want to have to worry about any tricky knight hops, as those had already cost me plenty of time leading up to this point), and partly objective (the knight would probably be a stronger piece with all the play on one side of the board).

White’s problem is that his pawns are stuck on light squares (and Black’s bishop can attack those squares), while White’s own bishop has to stay at home guarding f4 and d4 and can’t really get behind Black’s king to attack the h6- or f6-pawns. Note that if we add a white knight and black dark-squared bishop to the equation, White’s knight would likely wreak havoc on Black’s weakened kingside square while the dark-squared bishop would only have a passive future. Thus, he tried to fix my h6-pawn by getting a pawn to h5, but I was not going to allow that.

After 46…gxh4! 47.Bxh6 Kg6 48.Be3 Ng5, I felt I was getting quite close to the draw. One more pawn exchange would likely draw, and if he lets me jettison my h-pawn, I would probably pick up his f3-pawn. Thus, he traded down further with 49.Bxg5 Kxg5, but with his pawns still on light squares, he has some trouble winning this.

Now I did see a draw and played 54…h3!. The pawn plans on running, and if 55.Kf2, Black has 55…e4 to get another set of pawns off the board. Once the f3-pawn is gone, the g4-pawn isn’t destined to stick around long either.

The following day, I needed to take advantage of a theoretical draw to save half a point again against the Bulgarian IM Jordan Ivanov. I had outplayed him in the middlegame to gain a clear plus, but then I threw it all away and then ended up even worse when I overlooked the same tactical idea twice! It came up once around move 25, and about 25 minutes later, I missed it again … 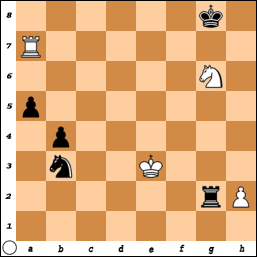 I had entered a double rook and knight endgame a pawn down, but I quickly recovered the pawn at the cost of allowing his rook to invade on the 7th rank. I had seen all this when I played 31.Kf2, and now forced the draw with: 40.Ne7+ Kf8 (moving up to the 2nd rank would allow 41.Nc6 with check, picking up the a5-pawn and drawing easily) 41.Nc6 Rg5 42.Rb7 Rh5 43.Nxa5! and Black is going to lose all his pawns. While R + B vs R can pose serious practical difficulties for the defender, R + N vs R is pretty simple. Some strong players have lost it, but that’s usually when you don’t have a 30-second increment to rely on.

These two draws came in rounds 5 and 6, and after that, I won a couple games and drew with GM Vazquez to move up to 7/9 and into a share of first place.

This entry was posted in Sevilla 2010 and tagged chess, Spain. Bookmark the permalink.