How Can You Falter, When You’re the Rock of Gibraltar?

I’ve got a backlog of posts to add now that the tournament in Gibraltar is over, so this will be the first of a few before I start my next event in Cappelle la Grande (France) on February 13th.

The Gibtelecom Masters finished yesterday, and I ended up with 6.5/10. Not a bad score point-wise, but I didn’t play up to my expectations or my rating – I lost all the points I had gained in Sevilla to start off this trip. I’ll cover the first 6 rounds in this blog before wrapping up the tournament in a later post. Although 2 Americans tied for first (GM Gata Kamsky and GM-elect Alex Lenderman), neither was involved in the playoff (the top 4 on tiebreaks had a rapid playoff for the title). Emerging from that fight was GM Michael “Mickey” Adams of England. Mickey was once a perennial top-10 player – and one of the “Linares guys” according to Kasparov – but he’s slipped a bit over the past few years and I think this was his biggest tournament win in a few years.

In the first round, I won as black against Rafael Montero Melendez, a 2248 FIDE rated player from Spain. As though it’s an unwritten rule for my first-round pairings, he played the Exchange Slav against me. I’ve played the Slav for about 3 years now, and I face the Exchange Variation in about 1/3 of my games with it. After the game, I checked the database to see what the average incidence of an Exchange Slav is amongst games that fall under the ECO codes D10 to D19 (the range for all the variations of the Slav). As it turns out, in my database, it’s about 1 out of every 7 games, so either I happen to be playing a lot of opponents who normally play the Exchange, or they’re afraid of me and try the Exchange in the hopes of a draw.

In any case, I was not ready to call it a day after seeing 3.cxd5, and we reached a position after 13 moves that was decidedly unlike a normal Exchange Slav:

I had gone an early pawn-hunting expedition with my queen, playing …Qd8-b6xb2-a3-a5 (he had prepared the pawn sac idea, as he blitzed through that phase of the game), and now I returned home with 13…Qd8!?. I came up with this move after thinking for about 18 minutes. The idea is to play …Bd6 to exchange off White’s dark-squared bishop, as that would both clear the way for kingside but also relieve some of the queenside pressure I faced.

Now, in my head, I continued 18…Qxb7 19.Bxb7 Ra7 20.Rb1, and I didn’t see a good way to extricate the rook, noticing that the rook is trapped after 20…Ne8 21.Bb8. Unfortunately, there are two mistakes in this long line from the Black side – for one, after 21.Bb8, while it’s true that Black’s Ra7 has no safe square, Black has the simple 21…Nxb8 to save it! Also instead of 18…Qxb7, Black can play 18…Bd6 with a clear plus. White has other ways of continuing after 13…Be7, but since this line doesn’t work, my idea with 13…Qd8 was probably not the best one.

After 13…Qd8, the game continued 14.Qb1 Bd6 15.Bxd6 Qxd6 16.e4 dxe4 17.Nxe4 Qd5 18.Nxf6+ gxf6. White is still down a pawn, but Black’s kingside has been opened up, so his king probably won’t find shelter there. The center has also been opened up a bit, so Black has to be careful about keeping his king on e8 as well! Finally, Black’s still not properly developed, as after 18 moves, all I had to show for my efforts was that I had moved my queen and bishop off their original squares. White had definite compensation at this point, but I managed to outplay him in the ensuing complications, and he threw in the towel 10 moves later when he had shed a couple more pawns to no avail.

I drew the following day against IM Kenny Solomon (South Africa). This was pretty disappointing, since I had achieved a completely winning endgame only to throw it away with two hurried moves. The following day, I drew as black against FM Guillaume Camus de Solliers (France), in a game where my opponent played a rather safe line of the Meran, and I didn’t get any real winning chances.

Then, in the 4th round, I had the white pieces against Yves Duhayon (2241, Belgium). I haven’t played 1.e4 in a long time, but for this game, I decided to go after his Ruy Lopez and I achieved a clear plus. Unfortunately, in the following position, after I had played 21.Qd2-c2, I walked into a very nice drawing combination.

I could have immediately sacrificed the exchange on e4 with 21.Rxe4 dxe4, and then played 22.Qc3 to cement my control over the dark squares. White threatens 23.Nc5 and various knight forks all over the place while Black’s rooks don’t have any good open files. As Kasparov would say, the quality of his pieces more than compensates for the material disadvantage.

Instead, I decided to play 21.Qc2, thinking that I would have time to take on e4 later if need be, and I might prefer to keep the material and kick the knight with f2-f3 instead at some point. Kudos to him for spotting a tactical resource that I just wasn’t looking for.

I refused the bishop and so avoided any knight forks with 24.Qxc6, but after 24…Qxf2+, there was still no good way for me to avoid a draw in the end. Black’s attack is quite strong, so I had to force a repetition on move 37 with checks on g6 and h6.

With three straight draws in the books, I was desperately hoping to get back into the win column in the 5th round, and I managed to do so, beating FM Juan Carlos Perez Pardo (2298, Spain) with black. Then in round 6, I faced off against IM Yohan Benitah (2390, France).

I had surprised him with an over-the-board idea, and he immediately erred with 13…Nd7-b6. After exchanges on b6, we reached the following position:

I now went on the attack with 15.Nd5! Qxb2 16.e4! – this is the key move, closing the diagonal for the Bf5, and thereby gaining the b1 and c2 squares. While the strategic goal is nice, it needs tactics to support it, and here the tactical point is that 16…Bg4 runs into 17.Bxe5!, when White removes the defender of the Bg4 while hitting Black’s queen on b2 – Black will lose a piece for sure here.

Thus, he had to retreat with 16…Be6, but that gave me time to push forward. I continued with 17.Rc2! Qa3 (17…Qb3 allows 18.Rxc6+, discovering on and winning the queen) 18.Qd4! Kb8 to reach the following diagram. By the way, 18…Qd3 is another critical defensive try, but White is winning after 19.Rxc6+!! bxc6 20.Qxa7, when Black can’t stave off the attack. There are a lot of nice variations there if you’re interested in working that one out … 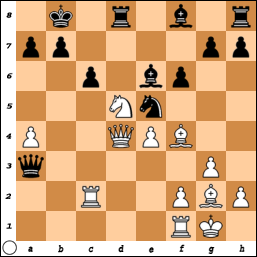 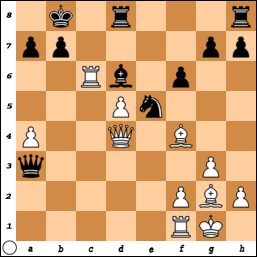 So after 6 rounds, I had 3 wins and 3 draws. While I was never in any real trouble in these games, I did throw away two clearly better/winning positions and turned them into draws, so I wasn’t particularly happy with my play up to this point. But the real disaster of the tournament was to come in the next couple rounds …

2 responses to “How Can You Falter, When You’re the Rock of Gibraltar?”