It’s been a few days since my last blog about Cappelle la Grande, but it’s now high time to wrap up the tournament. I finished with 6.0/9 –the same score I had last year – but I got there in a completely different manner. Last year, I played only two players above 2400 FIDE in 9 games; this year, I faced my weakest opponent in round 1 (GM Arkadi Vul).

After winning my first two games, I had the black pieces against the young Italian IM, Sabino Brunello, of Italy. He recently wrote a book on the Ruy Lopez from Black’s point of view (Attacking the Spanish), and so I guess he’s a bit of a theoretical expert. After about a dozen moves, the difference in opening knowledge showed:

White has the two bishops, better development, and more space. It’s pretty amazing that I can find myself in these sorts of positions. Luckily, that also means I have some experience defending bad positions and so I wasn’t about to give up right away.

I decided that I couldn’t just sit around and wait for him to improve his position with an eventual e5 (and Nc3-e4-d6) or d5 (if the c5-pawn is well protected), so I played 13…b6!, sacrificing a pawn. The point is that after 14.cxb6 axb6 15.Qxb6, Black has 15…Nh5!. The bishop is stuck to f4 because if it moves, then 16…Nxg3 wins the material back (the h2-pawn is pinned). Meanwhile, if he lets it get taken on f4, then his kingside will be quite open and potentially somewhat weak; the queenside, though, would also be open, and so he probably wouldn’t be able to use his extra pawn there for quite some time.

For what it’s worth, RobboLito (C) agrees with Brunello’s decision in the game to not take the pawn on b6! He played 14.cxb6 axb6 15.Bg2, guarding the Rh1 so that …Nh5 no longer does anything useful. Meanwhile, White eyes the c6-pawn now that the c-file has been opened. I played 15…Nbd7, guarding the pawn and preparing …e5 in some cases. I wanted to try and keep the Bg2’s diagonal closed, so I was hoping to play …e5 and take back with a knight at some point. My bishop would then get the c5-square as well. In order to stop that, he played 16.e5. However, a very interesting position would have arisen if he had played 16.0-0:

I had seen an amazing defensive resource here. After 16…e5!, Black looks to be committing suicide – the Qb3’s diagonal is opened and White has castled, so f7 is going to be targeted. After 17.dxe5 Bc5+ 18.Kh1 Ng4, White is in some trouble, since mate is threatened on h2 and Black will take back on e5 with a knight next, guarding f7 and keeping the Bg2 shut in. However, 17.Bxe5 looks quite good – after 17…Nxe5 18.dxe5, what is Black going to do? The knight can’t move from f6 because of Qxf7+. Luckily, I had seen 18…Bc5+ 19.Kh1 Qc7!!, which is quite reasonable for Black! The point is that after 20.exf6 Qxg3, White has no dangerous check and he can’t stop mate on h2 or h3 (if 21.h3 Rxh3+ and mate follows). He also has no way of guarding the e5-pawn, so if he doesn’t take on f6, Black takes on e5 with his queen and all of a sudden, Black’s position makes sense. After the game, he admitted he hadn’t seen this line, but he had felt that allowing …e5 was not worth considering.

On a side note, I’ll refer to another book, FM Daniel Naroditsky’s Mastering Positional Chess. I haven’t read it, but I flipped through it briefly in Gibraltar, and in his chapter on “Defense in Worse Positions,” I was pleasantly surprised to see this example:

I was black against Ernest Real de Azua at the World Youth U-16 in 2000, and after an opening debacle found myself in the following situation. Luckily, though, White had just played 19.Nd2-b3?, which allows a stunning rejoinder – 19…b5!!. The point is to clear the b6-square for a knight so as to trap White’s queen! After 20.Qxb5 a6 21.Qa4 Nb6 or 20.cxb5 Nb6, the queen is trapped. Admittedly, White gets compensation after either move, and after 21.bxc6 Nxa4 22.cxb7+ the game eventually ended in a draw. Still, given Black’s position prior to 19.Nd2-b3, that’s something to be happy about. I’m pretty sure I could write a whole book based on this chapter’s theme!

Anyways, after 16.e5, the game took a rather different course and I was still defending for a little while. After 21.g3xf4 (I had played 20…Nd5xf4), we reached the following position: 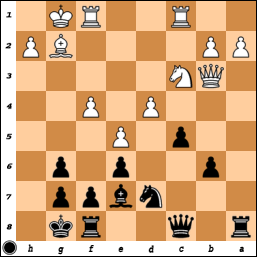 Black’s Ra8 is under attack and White wants to play d4-d5 next and then try and overrun Black’s position with his central pawns or centralized pieces after an exchange on d5. Note that 21…cxd4 allows 22.Nd5, when Black loses an exchange without any compensation.

It might seem odd to invite dxe6 or d6, but at least then White’s pieces don’t get into the game so easily. The rook on a5 then will hit the e5-pawn and exert some pressure along the 5th rank. That comes into play a couple times. For example,

Actually, when I played 23…g5, I thought that I was already a bit better. After the game, my opponent admitted that he thought he was still better, but that might have been more out of inertia based on previous evaluations. The omniscient computer, though, thinks it’s about equal. But it’s a game between humans, and in the resulting complications, I outplayed him and achieved a winning endgame. I was in some time pressure for a while, but as soon as made my 40th move, he resigned.

Cappelle has one double-round day, and this was it, so after this 9 AM game, I played in the evening against GM Marcin Dziuba (2588 FIDE, Poland). The game ended in a draw after a couple hours of play, as even though I was a bit better, it was quite complicated and I didn’t feel like I was thinking as clearly as I would have liked.

That brought up another fateful encounter with black, this time against the 2nd seed GM Murtas Kazhgaleyev (2643 FIDE, Kazakhstan). The bad prep as Black continued, as I had once prepared a piece sacrifice (for 3 connected passers) and confidently played it when the opportunity arose. Unfortunately, he had looked at this position before himself, and while in a group setting with a couple other strong GMs, he hadn’t figured out what to do, he had solved all of White’s problems and then some on his own. 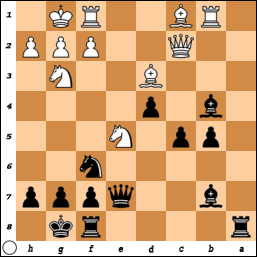 Black’s position looks menacing – the e5 knight is hanging, and on something like 21.f4, Black has 21…c4 and White will be lucky to get two pawns back for his extra minor piece. Unfortunately, with 21.Rxb4! cxb4 22.Nc6!, he broke my pawn phalanx apart and began to slowly pick the pawns off one-by-one. I can’t play 22…Qd6 here because of 23.Nf5!, and taking on c6 allows a deadly fork on e7. That means I can either give up my Bb7 (and lose the pawns in the long run) or play …Qd7 (and lose the pawns right now). I chose the latter, hoping to make use of the bishop, but it was not to be. In either case, the problem is that the pawns are split and nicely blockaded by White’s pieces. And while Black can try to hang onto them for a short while, White can stir up an attack of his own with ideas like Qc5-g5 and Ng3-f5.

Thus, after 5 games, I had 3.5 points and this last one hurt. I had beaten Kazhgaleyev in Mainz in 2008 with the black pieces, but here, I had made him think only once during the game!

In round 6, I got back on track with a win against IM Jorge Cabrera Trujillo (2384, Spain). In return for messing up my pawn structure, I managed to stop him from castling, and in the end, this was the more important factor. The following position arose after Black played 23…c6-c5: 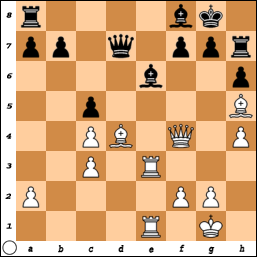 I considered moving the bishop to e5, but then it’s still not obvious how White is going to break through. I decided to look for something more forcing and found it in 24.Rxe6!. There are two main options for Black here, 24…fxe6 and 24…cxd4, and both seem to fall short:

One response to “Bad Prep Days”