With 4.5/6, I barely made the cut in the 7th round and squared off as black against GM Reynaldo Vera of Cuba. Although his rating has dropped over the past few years, he’s very experienced and was playing well at Cappelle (with a performance rating over 2600). Throw in the facts that he had been playing both sides of the Semi-Slav for about 25 years and that I used his book (Chess Explained: The Meran Semi-Slav) to learn it, and I knew it wouldn’t be an easy game.

At my tournaments recently, even with one game a day, I only try to spend about 1-2 hours preparing for every game. I used to spend much more time preparing when I was playing sporadically (as in the summers of 2006 and 2007), but now that I work on chess much more, I have less to do in general. It also lets me conserve my energy for the game. Thus, even though I wasn’t sure where he would go in the Meran, I didn’t spend a bunch of time and decided to focus on the line in which Kazhgaleyev clobbered me.

Unfortunately, I guessed wrong and he instead went with a line that has become pretty popular over the past 2-3 years: the 5.b3 Anti-Meran (1.d4 d5 2.c4 c6 3.Nf3 Nf6 4.e3 e6 5.b3). Kramnik won a couple nice games with it, and whenever Kramnik plays, people pay attention. When Avrukh made it a big part of his book, GM Repertoire Volume 1, it really took off.

For example, in 18 games where I tried to play the Semi-Slav last year (i.e., I didn’t play the regular Slav), I saw this line 3 times. By comparison, I only saw the main line Meran with 5.Nc3 Nbd7 6.Bd3 a grand total of 0 times (that’s also why the idea I played against Kazhgaleyev had been sitting on the shelf gathering dust for over a year)!

Most recently, I’ve been experimenting with a Stonewall setup against this system (with a quick …Ne4 and …f5), and this game was no exception. But unlike my 3 previous opponents with this setup, Vera decided to play Nfd2 instead of Nbd2 at a key juncture, hoping to kick my knight away from e4 with a later f3. In the following position, he had succeeded in this aim:

Ideally, he would break with e3-e4 at some point, putting serious pressure on Black’s structure. If Black takes on e4, he will be left with a horribly weak e6-pawn, while the alternative of allowing White to grab a ton of space with e5 is not particularly enticing. In this specific position, though, I had seen that 11.e4 runs into 11…dxe4 12.fxe4 Nc5!, taking advantage of the pin on the d4-pawn. If 13.dxc5, Black plays 13…Bxc5+ and then plays 14…Qxd3 with advantage. However, 13.Bc2 drops the e4-pawn, so White is not ready for e3-e4.

Thus, I had defused White’s entire plan with Nfd2 – as GM Anton Kovalyov remarked in our post-mortem (amusingly, he was one of the guys against whom I tried this Stonewall approach last year), the knights on d2 and b1 look a bit funny now. Unfortunately, I relaxed a bit having dealt with White’s main strategic goal and proceeded to make a couple small errors. While it didn’t land me in a horrible position, it did mean things weren’t as comfortable as they could have been. By move 25 or so, both of us were getting a bit low on time and I decided that under those circumstances, the initiative was worth a bit more than usual.

Black has the obvious plan of playing on the kingside, with moves like …Rg7, …Ng6, …Nh4, …Kh8, and …Rag8 all factoring in. However, as soon as Black puts a knight on g6, White is going to take if off – if a Black knight reaches h4, then White is going to be in real trouble (it’s virtually impossible to hold both g2 and f3 forever). Thus, if Black plays 22…Ng6 right now, White will take, and Black has no way of keeping the file open. The h-file is not as useful as the g-file in this case, as the Nf1 guards h2 and it will take Black a long time to triple on the h-file.

All this points to 22…Rg7 as the right move, as then Black can take back with the rook and at least keep the g-file open. However, I was worried about 22…Rg7 23.b6!?, a pawn sacrifice for the initiative. After 23…axb6 24.cxb6 Bxb6 25.a5 (not 25.Re5?? Qxe5! – the d4-pawn is pinned), Black has a tough decision. If the bishop goes back to c7 or d8, a white knight lands on c5, hitting e6, d7, and b7. If the bishop drops back to a7, White still plays 26.Nc5 and while Black can take the knight, 26…Bxc5 27.dxc5 is no picnic. Black’s attack is still quite a ways from being dangerous while White is making all the big threats. The computer agrees with me in this case, as even though White is down a pawn, it’s giving White a solid plus.

Worried about this, I decided to play 22…Ng6 anyways. After 23.bxc6 bxc6 24.Bxg6 hxg6 25.Nc1, the g-file is closed and White appears to have enough time to drop a knight into e5. If a White knight lands there, Black’s position is essentially lost – the kingside attack will just be a pipe dream and his pawn structure and worse pieces will then be exposed. Thus, the pawn sacrifice with 25…e5! 26.dxe5 is virtually forced (at least now White can’t put a piece on e5), and I started to reroute my useless Nh5 with 26…Ng7. This is another pawn sac that the supposedly materialistic computer agrees with. Activity is often worth more than material! Vera was unable to keep a lid on my activity and quickly found himself in a worse position:

Both of us were down to about 2 minutes left here (with a 30-second increment) to reach move 40. After a short think, I thought I saw a way to win with 32…Bxf1? 33.Rxf1 Rh7? (the question marks are after the fact … at the time I might have appended exclamation marks to them in my head!). Black appears to have a crushing attack on the kingside – how does White stop 34…Qg3 35.h3 Ng5 and a breakthrough on h3?

After the smoke cleared on move 41, I was up a pawn in a Q + R endgame, but my king was a bit exposed and my pawns could have been better. I probably could have posed him more problems in that endgame, but as it was, I made a simple miscalculation and proceeded to drop my extra pawn. A draw soon ensued.

I was debating what to do against him in the opening, as he had held GM Chanda Sandipan (2622, India) earlier in the event in a rare line of the Semi-Slav that he seems to play regularly. I was thinking aloud online to GM Abhijeet Gupta, who kindly suggested that I try the 5.b3 Anti-Meran. After looking at it for about 30 minutes, I decided to give it a try, and so for the second day in a row, we got the same position after 5 moves:

After 5…Bb4+ 6.Nbd2 Nbd7 7.Bb2 0-0 8.Bd3 c5, we had already reached a new position for the opening books. However, I wasn’t too impressed with this approach, as after 9.a3, Black has little choice but to give me the bishop pair with 9…Bxd2 10.Qxd2. White of course isn’t winning, but I was happy with the result of the opening already, as I thought it’d be tough to keep the bishops bottled up forever in this structure.

Strangely enough, we’ve transposed into a Nimzo-Indian Rubinstein (4.e3), where White has an extra tempo! This is because Black lost a tempo with …c7-c6-c5 in the opening phase. Although I didn’t really need to know this to play the position, it was a useful bit of info – I play the Rubinstein Variation of the Nimzo while Cori doesn’t play the Nimzo, so I could be satisfied from a practical point of view and an objective point of view (I think White is better here). Thanks Abhijeet for the opening tip!

With his pawns on c4 and d4, Black has no real central squares for his knights. Meanwhile, White has a number of possible plans – if he moves the Nf3, he can think about f2-f4-f5. He can also play on the queenside with a4-a5, softening up the b6-pawn. Black’s traditional plan is to put his queen on f4, but by retreating my knight to d2 and then playing Qe3, Cori faced a tough decision – exchanging queens would leave my potentially weak center strengthened, while moving to h4 leaves it a bit out of play after h2-h3. He chose the latter, but then struggled to find any constructive plan. Skipping ahead a number of moves, we reached the following position:

I was pretty happy after this win, which I thought was pretty smooth. It moved me up to 6/8 and a 2665 FIDE performance after 8 rounds. With the leader on 7/8 (and facing a 6.5 pointer), there was no chance to get into the winner’s circle, but 7/9 would be a huge score for me.

However, it was not to be. In the 9th round, we started early in the morning and I had the black pieces against GM Yuriy Kryvoruchko (2602, Ukraine). I played the Zaitsev Variation of the Ruy Lopez, but I was then tricked into transposing into the Breyer Variation of the Lopez, but with an extra tempo for me (the extra tempo was …h7-h6, so not the most useful of moves). In the resulting positions, he had done a lot more homework and was generally much more familiar with the themes of the position. 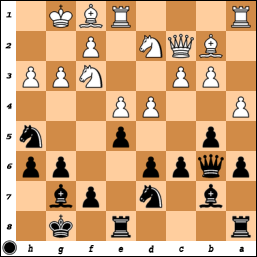 Even though I’m not a Breyer player, I managed to find some reasonable ideas at the start of the middlegame. Unfortunately, here, I messed up with 20…Nf8?. I was concerned about White playing c3-c4, and so I wanted to add some pressure to d4 to make that advance less likely. Unfortunately, the knight maneuver loses time and my knight on h5 is still out of play. Instead, 20…d5! would have seized the ideal moment for breaking in the center. Note that the d4-pawn is glued to the square because exchanging on e5 would allow …Nxg3 (the Qb6 pins the f2-pawn). I was looking at this move all the time, so I’m not sure why I didn’t play it – I’m not sure what ghost I was afraid of here … 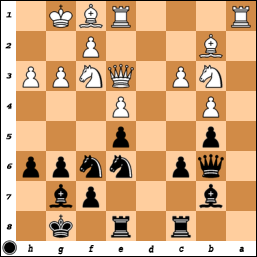 At first glance, Black’s position might look alright – all his pieces are essentially in the game, and while the Bb7 is silly, the Bb2 doesn’t look so great either. Unfortunately, in this symmetrical structure, White is the one making the threats and this additional detail means that Black won’t find the time to complete his reorganization. The immediate exchange on e3 allows White into a7, and my original plan of 26…c5 allows 27.Ra5! – the c4-pawn is pinned and there is no good way of guarding b5 without really messing up Black’s coordination. Having only now realized that …c5 was problematic, I began to understand the danger I faced.

With a later Nb3-a5 and c3-c4, White continued to push the tempo and make inroads into Black’s position. In the following position, he dropped the hammer blow: 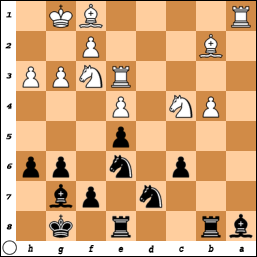 So, I scored 6.0/9 in my first two appearances at Cappelle, but this was definitely a better performance than in 2008. Even with the last-round loss, I threw down another 2600+ performance (my 10th!) and gained about 9 FIDE points. On the next FIDE list, I should be about 2549 FIDE.

With the win, Kryvoruchko took 2nd place on tiebreaks, half a point behind the young Ukrainian GM, Yaroslav Zherebukh. Zherebukh is only 16 years old! Given the boatload of extremely talented young players these days it seems like I’m one of the old guys on the circuit now. =)