Do you see how White wins now?

After a 2-0 start, I got the black pieces against GM Ruslan Pogorelov in round 3. Pogorelov had crushed GM Fidel Corrales with white in round 2 and this was his second white in a row. We reached the following position after I played 18…Kg8-f8. 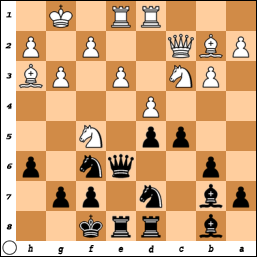 After a long think, Pogorelov came to the same conclusion and played 19.Bg2. I kicked the knight back with 19…g6 anyways (20.Nxh6 Kg7 traps it) and regrouped. Although the position was still complicated, probably White is marginally better. However, I managed to slowly outplay him and get some advantage. However, it wasn’t enough to win the game and it ended in a draw.

Unfortunately, the computer scoffs at my idea and points out that White has one winning move in that position – 28.Ne6+!!. White mates after king moves or 28…fxe6, while 28…Qxe6 releases the pressure and allows 29.Qxd3.

Of course, I made a mistake earlier in my calculations which made the above situation a moot point. Neither of us saw it in fact, but instead of 21.Nd4, White has 21.Ne2!, which cuts across all of Black’s tricks. A knight will land on d4, hitting queen and bishop and leaving Black’s position full of weaknesses.

I’m not sure what I would have done if he played 19.dxc5. While I was walking around and thinking about the position, I was certainly focused on 19…g6 and thought it would work out. But I had also seen the alternatives (all of 19…d4, 19…Nxc5, and 19…bxc5 have to be considered, although each has some drawback), so I’d like to think I would have thought twice before responding. All this also suggests that 18…Kh8 was a better move than 18…Kf8.

In any case, the draw with Pogorelov completed the first third of the event. I still wasn’t in great form, but I managed 2.5/3. The next three rounds would see me finally start to round into better form.

This entry was posted in Balaguer 2010 and tagged Balaguer, chess, Graham Greene, Spain. Bookmark the permalink.