How to Trap a Heffalump

A heffalump, for the uninitiated, is an elephant-like creature from the Winnie the Pooh series of children’s books. I think it was also used by Simon Webb in Chess for Tigers, although I forget the details of his use.

After my 3rd round save, I had 2.5/3 and was unceremoniously sent packing off the stage. Back in the main hall with hundreds of players, I felt a bit like a slow-moving creature with a big target on my back. In both the 4th and 5th rounds, I found my opponents to be rather ambitious in their preparation while I foolishly fell into their traps. My 4th round game featured FM Lars Ootes (2315, Netherlands) with the black pieces. 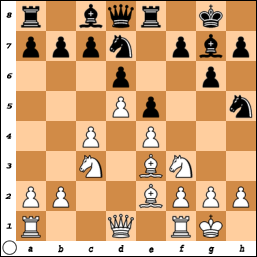 Recently this King’s Indian setup with 6…Nbd7 and 7…e5, followed by the seemingly illogical transfer of the Bg7 to e7 (via f8) and the Nf6 to g7 (via h5) has become popular. Black often loses more time because his rook has to move to e8 and then back to f8 (to support his kingside attacking ambitions) in most cases. Strong GMs like Radjabov and Bologan have played it with success, although in my view, the reasonably good score of the opening is more due to some practical considerations than any objective merits.

I had faced this line once before, in 2008, and there I played something resembling the main line with 10.g3 Bf8 11.Ne1 Ng7 12.Nd3 f5 13.f3. While I later achieved a clearly better position, I knew Black’s setup had been refined since then and I didn’t want to get bogged down in a theoretical discussion.

Thus, I deviated with the simple 10.Re1 (this is to avoid …Nf4) Bf8 11.b4. While Black re-arranges his entire kingside (after having just developed those pieces), I figured I could gain time and start the traditional queenside pawn storm. After he played 11…Ng7, I decided I would get something similar to one of the main lines of the KID with 12.Nd2 f5 13.f3. Almost all of White’s moves have been very natural (White’s rook isn’t normally on e1, and often he brings his knight to d3 via e1 instead of c4 via d2, but Nd2 is also quite reasonable), while Black has lost some time. Thus, even though Black isn’t obliged to play a quick …f4 and …g5 here, and can instead exchange the dark-squared bishops with a later …Bg5 or …Bh4, I was happy about my chances. 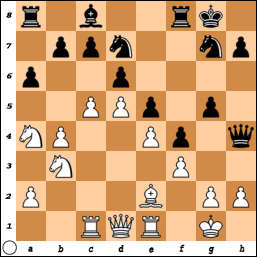 In the position from the diagram above, Black had just played 19…Re8-f8, possibly preparing …Rf6-g6/h6 while marking time on the queenside. To me, Black’s position is quite bad – his one real achievement is the exchange of the dark-squared bishops as that weakens White’s kingside. However, his knight on g7 is silly (normally Black allows this kind of attack with knights on f6 and g6). Also, White’s queenside attack is farther along than normal. Finally, an exchange of Black’s light-squared bishop is usually seen as a death knell for the kingside attack because then …g4 and sacrifices on h3 are impossible. Thus, the Nd7 is somewhat stuck as if …Nf6 and an exchange on d6, White has Nb6 with tempo.

I erred here, unfortunately, with 20.Rc3?!. It’s not a horrible move, and it’s somewhat typical in these positions – the rook goes to the 3rd rank to possibly swing over in case of f3xg4 later on, while also opening the c-file for a tripling of the major pieces. However, there was a much better move in 20.Nd2!. The knight’s job on b3 is done (it went there to support c4-c5 a few moves ago), and from d2, it can either hop to c4 (hitting b6 and d6) or back to f1 (guarding the h2-pawn and the kingside). It also covers the e4-pawn in case of a later f3xg4. Finally, in an incidental but somewhat important point, it guards the Na4 so that after …Nf6, …Bd7 doesn’t come with tempo.

My position after 20.Rc3?! was still good, but 20.Nd2! would have avoided a lot of the tricks that Black found in the game. 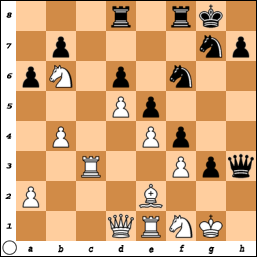 Black just played 26…Ra8-d8 to reach the position above. White is winning here, but the margin for error is much smaller than it would have been with 20.Nd2! earlier. My kingside is exposed and this gives Black practical chances.

Both of us were down to about 4 minutes at this point to reach move 40. I essentially only saw two plans for Black: one was to move the queen back from h3 and play …h7-h5-h4-h3 (5 moves), and the other was to bring the rook to h6 (3 moves).

Because of these two plans, I was debating between 27.Qd2 and 27.Qc2 In both cases, the ideas is to move the bishop away and transfer the queen to g2. Then Black has to retreat and White can either use the c-file to exchange rooks or reroute his minor pieces to better squares.

I didn’t see any concrete differences in them against these two plans, so I went with the more aesthetically pleasing 27.Qd2?, which keeps in touch with the rook on e1. While this doesn’t throw the win away, it throws a good chunk of the advantage away! 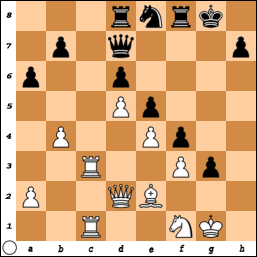 After 29.Rec1, he played 29…Ne8 covering the c7-square. Oblivious to the danger, I played 30.Qc2?, threatening 31.Rc8 and exchanging off some of his potential attackers. I had overlooked 30…b5! though, when Black has a huge threat of 31…Qa7+. Actually, after 27.Qd2?, White’s advantage according to the computer all but disappears, but after 27.Qc2 he was winning. Instead of 30.Qc2?, I had to stop b5 with 30.b5!, but giving up another pawn and opening the a-file for Black isn’t a great thing. At least I wouldn’t be lost there.

Again, in the 25 seconds or so I took here, I didn’t see what Black’s plan with the king move. I temporized with 35.Qd2 (35.a4 was better, but it probably still doesn’t save White). He then played 35…Rd7!, and now I understood what was up.

This was a very disappointing game to lose. I thought I had played pretty well up to the 27.Qd2 mistake while my opponent didn’t seem to do anything impressive until we both got into time pressure.

Going into round 5, then, I felt like I had just thrown away a full point. I was black against FM John Delaney, an older Irish FM who had only a handful of games in recent years. It was a French Winawer, a small surprise, and then he played the once-popular Smyslov variation with Qd2. 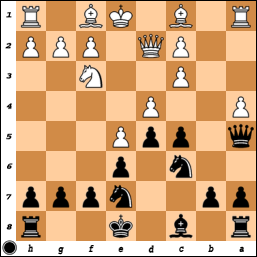 The main thing I remembered about this position was that Smyslov had won some nice endgames after exchanges on d4 and d2. Theoretically, I knew it’s not supposed to be difficult for Black, but I also seemed to remember that I had played 9…f6 back in 2005 here. It seemed to be a normal-looking move, so after a quick check, I played it.

When I came back to my room that night, I noticed that this was the move I had in my notes as well. Unfortunately, it’s the wrong one. I had won a game in January 2005, but by April 2005, White had found a strong new idea that essentially consigned …f6 to the garbage pile. I wasn’t playing regularly back then, so I never re-checked the line. Furthermore, by the time I started playing regularly again, I had switched to 1…e5.

In any case, my opponent had done his homework well and played the correct 10.Bb5!. As he told me after the game, while he had never played this line before, he had noticed the 2005 game and the general problems in the line since then. Black’s in a bit of a bind now, as he can’t actually force the queens off anymore. After 10…cxd4 11.exf6 gxf6 12.Nxd4, for example, the center is opened and the doubled c-pawns are of little importance. Meanwhile, 10…0-0 11.Ba3 is extremely annoying as 11…cxd4 12.Bxc6 leaves the Ne7 and Rf8 awkwardly placed.

I tried 10…Bd7, but after 11.exf6 gxf6 12.0-0, there’s no safe haven for Black’s king. White will play Ba3 or dxc5 soon and then attack on the queenside (Black’s not likely to go kingside here). I spent a lot of time evaluating 12…0-0-0 13.Ba3 cxd4 14.Nxd4 e5 15.Nb3 Qc7 16.Nc5. This turns out to be the main line here, and it is probably Black’s best option, but I didn’t think my kingside play was very impressive, while the Nc5 is a huge thorn in my side as the b7-pawn is going to be very weak. The center is also somewhat rickety as the pawns can’t advance easily and the d5-pawn in particular is not well supported. White is clearly better, but it’s not lost. 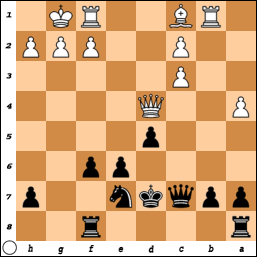 White has a bunch of tempting continuations here, with 17.Re1 and 17.Ba3 being two of the most obvious. I think he chose the best line, though, with 17.c4!. If I allow the center to be opened, my king will be a sitting duck, and I can’t even shuttle it away to the queenside because if 17…Rad8?, White has Qxa7 whenever he wants.

I picked what seemed to be the best option – head for an endgame where White is much better (if not winning), but hope to trick him and save the game. It’s back to the simple art of the swindle, if you will.

I only escaped with a draw in the endgame after he felt some pressure from the clock and offered one. Objectively, the endgame is a win with an extra pawn, the bishop versus a knight, and a passed h-pawn. Knights are notoriously bad against rook’s pawns.

So once again, I was caught in my opponent’s trap (although a completely different kind than the one Ootes used). I dug myself a huge hole with my opening choice and then compounded it with the poor 12…cxd4? decision.

Thoroughly disgusted with myself and the 3 points I had “earned” up to this point, I decided to completely change my entire pre-game routine for the rest of the tournament and hope for a better second-half. It’s no fun being the heffalump.

This entry was posted in Sants 2010 and tagged chess, Chess for Tigers, heffalump, Ootes, Sants, Spain, Winnie the Pooh. Bookmark the permalink.