Let Me Take a Trip Down Memory Lane

I haven’t been playing recently, but I have kept up with some of the major events. Unlike the Pearl Spring or Tal Memorial super-tournaments, though, I didn’t get a set of predictions in for the London Chess Classic. There are still two rounds to go, but GM Luke McShane is surprisingly in a tie for first – maybe leaving the vampire-squid on the face of humanity is good for one’s chess?

Anyways, back to my own chess travels, I’ve been trying to enter some of my old games from a pile of scorebooks I have lying around. I’ve got scorebooks dating back to 1993, I think, and while I think I have pretty much all my games from about 1996 onwards, there are lots of missing games in my database from those early days. Along the way, I’ve found some real “gems.” So in this blog, let me wax nostalgic about the old days, back before computers had taken over …

I can’t remember anymore, but this may have been my first win against a master, back in 1994 at the People’s Tournament in Berkeley, CA. In the first round, I was white against Frank Say (2306). I was about 9.5 years old and rated about 1800.

The game started off in typical fashion for me back then – with a sketchy gambit. 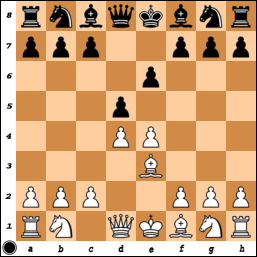 I’m not sure what the exact name of this opening (1.e4 e6 2.d4 d5 3.Be3) is, but I used to call it the French-Mar-Diemer Gambit. Growing up on a steady diet of Morphy and Anderssen games, gambits were my thing and I rarely hesitated to throw a pawn or two away. Almost all of Richard Shorman’s students play this way (at first, at least), and I was no exception.

The opening is surely bad, but that is the GM talking. At the level I was at then, there’s nothing horribly wrong with playing something considered sub-optimal by the upper crust of chess players. If you’re going to be improving, there’s plenty of time to learn proper openings later on (I still played the Elephant Gambit now and then as a 2200 – against other masters, that is!), and some gambits certainly teach important dynamic concepts that can be harder to grasp later on (I think Yermo has written about this).

Back to the game, though, we continued with 3…dxe4 4.Nd2 Nf6 5.f3 exf3 (5…Nd5 is the theoretically approved line, but something similar happens in the game) 6.Ngxf3 Be7 7.Bd3, reaching the position below. 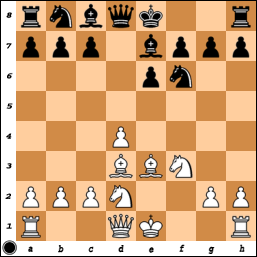 So what has White achieved in return for his pawn? Well, he’s ahead in development and he might have some open pathways on the kingside to use in an attack. Is it enough? Objectively, probably not, but I hadn’t yet progressed far enough in chess history to know of Steinitz’s rule that “a pawn is worth a little trouble.”

Say continued with 7…Nd5. After 8.Qe2 Nd7, I decided to bring more pieces into the central area with 9.Ne4. Maybe I also had ideas of saving the bishop with 10.Bd2, as 9.Bf2 Nf4 is certainly not the right way of doing that.

Black took this opportunity to exchange off the bishop with 9…Nxe3, and after 10.Qxe3 made a mistake with 10…h6?. I guess he wanted to cover the g5-square, and maybe coupled with my rating and age, he didn’t spend much time to consider the long-term ramifications of this decision.

It does take g5 away from my knights, but it creates a hook for me to attack with a pawn-storm. Importantly, it also gives me a tempo to get castled, which I promptly took with 11.0-0-0. With my king in the center, 10…c5 would have been quite nice for Black probably.

Black then compounded his troubles by castling into it with 11…0-0?. I had some positional feeling back then, but attacking is what I had more practice with. I didn’t need a second invitation to play 12.g4, reaching the position in the diagram below.

Black is already in some trouble thanks to his previous two careless moves. Actually, I’m not sure Black really can lay claim to an advantage here, but maybe the computer would find something.

I would think that 12…c5 is required, trying to get some active play going, but after 13.h4 cxd4 14.Nxd4, it’s not clear to me what’s going on. Black’s up a pawn, but poorly developed and his kingside has already been compromised. After a further 14…Nf6 15.Nxf6+ Bxf6 16.Be4, I strongly doubt Black can be playing for the advantage any more. Still, Black isn’t losing here.

I say “here,” because in the game, Say continued to dig with 12…Nf6?. Unlike the line above with 12…c5, White’s knight is still on f3 and he has no worries in the center. So after exchanging on f6, I played 14.h4. The threat is pretty obvious, and Black’s extra pawn is already completely meaningless. It looks to me like White is nearly winning!

There wasn’t much subtlety to my play that day – looking at the diagram, it’s pretty clear what White wants to do here. It should already be lost, but Black went down quickly with 17…Qd5?. Instead, 17…Qe8 looks like the only chance, but then White just needs to bring his remaining pieces to the f-file with 18.Rhf1. A decisive blow should follow soon enough on f7 or g6.

This was probably my first master scalp and a pretty memorable win. Sure, my opponent didn’t play that well, but that’s not really my fault. About 9 months later, I crossed 2200 USCF. At the time, that was a record for youngest national master in US history, but Hikaru Nakamura broke that a few years later, and it has since been broken one more time by Nicholas Nip.

One response to “Let Me Take a Trip Down Memory Lane”