Fire on Board (plus some less fiery examples)

With some free time this weekend, I was looking at the list of live games on the TWIC site and noticed this gem from the Bundesliga. It’s a game between GM Chuchelov (2565) and GM Shirov (2749). Of course Shirov is the favorite in such a matchup, but this game was still very impressive I thought.

This is a topical position from the Anti-Meran variations of the Semi-Slav. In fact, I’m pretty sure I had this position a few times over my Fellowship years. Unlike Shirov, though, I was hesitant to open the center up with my queen still on d8 and so I think I would play 11…Qe7 here.

Back in 1995, I fell into that same tactic against Bacrot at the World Youth (a rather embarrassing loss that broke my win streak of 6 games in that event). Shirov played 14…Nfe4 (I might have considered 14…g6), but Shirov’s move makes a nice impression in what follows. After a couple more moves (15.Ngxe4 dxe4 16.Rd2 f5 17.Rfd1), they reached the position in the diagram below: 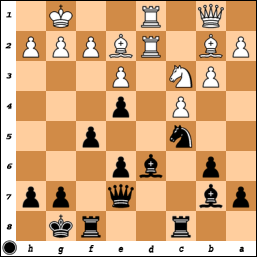 What would you play here?

I’d probably play 17…Bb8. White can’t invade on d7 very easily (18.b4 Qc7! 19.g3 Nd3! is not what White wants to see), and Black can either try and set up some kingside pressure with …Qc7 and …Nd3 (taking the knight after playing g3 would give Black the long diagonal), or challenge the d-file with …Rd8.

It’s important to note that Black needs 19…f4! for this to work – the pawn push both hits e3 (and by extension opens the f2-square) and prevents White from playing g3 himself. In some cases, Black might also want to play …f3 or use the 5th rank for his rooks.

White has a lot of choices here, and I can’t say I spent anywhere near enough time to exhaust White’s options, but I don’t see anything good for him.

In my last post, I mentioned an endgame from a game between Grischuk and Gelfand (see post here). In that one, Gelfand made use of a nice little en passant motif to force the win of a pawn. If Grischuk walked into the pin of the e5-pawn, then …f5 would seal the rook off from the proceedings.

Maybe I just haven’t been paying attention, but yesterday, I noticed another amusing en passant motif: 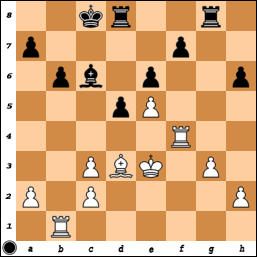 This is from the rapid game between Anand and Nakamura. Nakamura played 24…Rg5 here, hitting the e5-pawn. Now taking on f7 is natural and strong (and what Anand played), but at first I thought, why not 25.Kd4?

Anyways, after 25.Rxf7, White is clearly better, but it’s still a fight and Nakamura had to work hard to halve the point.

Finally, one more endgame I noticed as a recent ChessBase column. I didn’t find the explanation particularly enlightening if you don’t know what’s going on, so here’s my attempt:

As Mueller notes, after 54.Kxh3? Kxh5, Black has the opposition and wins.

The thing about this king and pawn endgame is that with the pawn as far back as it is, the key squares are those that are 2 ranks in front of the pawn. Thus, with the pawn on e6, if Black gets control of d4, e4, or f4, it’s over for White. 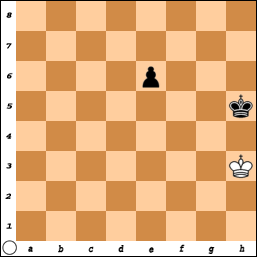 Therefore, with the opposition, White can get to a Ke3/Ke5 + e6 setup, but he then has to give way and let Black take one of those squares.

That’s really all there is to it, and so White has to “lose” a move with 54.Kh2 to draw. If Black advances the pawn to e5, then the key squares become d3/e3/f3, and so then White doesn’t care about the opposition!

One response to “Fire on Board (plus some less fiery examples)”