“Beware the knight, my son!
The jaws that bite, the claws that catch!”

(a liberal retelling of Jabberwocky)

Before continuing with my Greatest Hits, I’ll take a little detour into Greatest Flops. 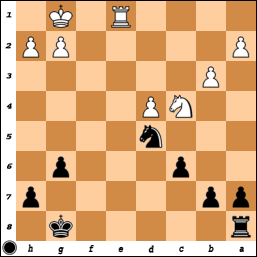 The above position was reached in my game against GM Bu Xiangzhi (he had the white pieces), at the first US-China Chess Summit match in 2001. The match was a 4-round team event, with a men’s team, a women’s team, and a junior team.

This was the first game of the match, and so far, things had gone quite well for me. I had neutralized Bu’s opening quite easily and reached the pretty equal endgame above. If Black now plays the simple 24…Rd8 (if 25.Na5, 25…Rb8 is enough), he has no real troubles. With the powerful knight on d5 and the rook on the 8th rank, White can never make any real headway, and if he takes his pieces offsides, then Black might bring his king up without worrying about any annoying knight forks. It also makes complete sense to bring the rook into the game.

Unfortunately, I completely lost my head and proceeded to play the endgame like a child.

I played 24…Nc3 here, which isn’t a big mistake in and of itself, but it takes me down a rather dangerous path. I’m not really sure what my idea was, but I guess it was that if White plays 25.a4 here, I’d respond with 25…Rd8, hitting the d4-pawn. Not that that makes it alright, just saying.

Instead, Bu played the natural 25.Re7. Not only do I not win a pawn by taking on a2, but I’ve let his rook into the 7th rank! Sigh.

Compounding my difficulties, I didn’t realize the danger that this rook would pose there, and played 25…b6?. The last mistake was one of judgment but it didn’t have to come back to bite me. If I had recognized the danger, I might have found 25…Rf8!. The b7-pawn is taboo because of 26…Ne2+ and 27…Rf1#, so that means Black will have time to play 26…Rf7, covering the 7th rank. The endgame would have remained equal in that case. 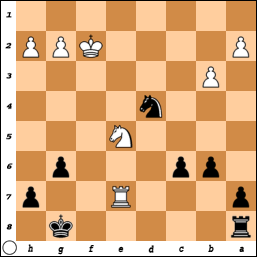 So Black is up a pawn, but he can only hope for something like 28.Ke3 Nf5+ at this point. The rook is a huge force on the 7th rank, and with Black’s king pinned to the back rank, he’s in some trouble.

Having only played with my knight for the past few moves, it was White’s turn to use his knight (after having activated his rook!). White continued strongly with 28.Nd7, and after 28…h5 29.Nf6+ Kf8 30.Rh7, White flushed the rook out of a8. After 30…Rd8 31.Rxa7, White’s no longer down a pawn and compared to the original diagram, it’s clear he’s made plenty of progress.

I wasn’t done self-destructing though, as I continued with 31…Nb5? (31…b5 is a better try), missing his strong reply – 32.Rd7!. The pawn-down endgame after exchanging on d7 is hopeless, but that means I don’t even get the consolation of having a potentially active rook. 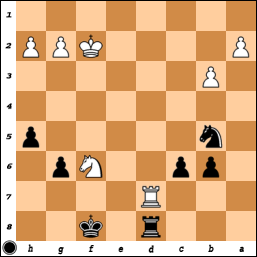 That was a rather embarrassing loss to start the match, and probably one of my worst endgames since becoming a decent chess player. So imagine my surprise when somebody as strong as GM Alexander Onischuk (my pick to win the US Championship this year!) managed to lose an endgame against GM Robert Hess that was about as equal as this one. I was an IM at the time of my loss, but it was really shocking to see someone of Onischuk’s caliber lose this endgame. 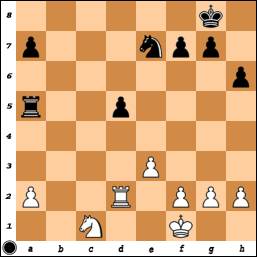 I thought Onischuk had an edge after the opening, but in any case, they reached this pretty equal endgame after Onischuk played 28.Nd3xc1. While Black’s knight danced around the queenside, the position seemed to stay about level for a while, until White played 39.f4 to reach the following position:

An exchange of minors on f4 left White with two serious weaknesses on a2 and f4. Hess proceeded to walk his king to g4, reaching the following position  eventually:

Strangely enough, I saw this endgame referred to as a theoretical draw (given the f+h pawns). I’m not really sure what they’re using to come up with that conclusion, but it doesn’t seem that way to me.

Some f+h endgames are indeed drawn, but this one looks pretty bad to me and I don’t see any saving ideas. With the king on the back rank, it looks like a lost cause. Onischuk himself gave up in a few more moves and even ended up missing out on the semi-finals.

This entry was posted in Uncategorized and tagged Bu Xiangzhi, chess, endgames, St Louis, US Championships. Bookmark the permalink.

One response to “Wanted: Vorpal Sword”