Will Second for Food

The Candidates Matches are going on right now (the 2nd round will start tomorrow with Gelfand-Kamsky and Kramnik-Grischuk), but there was one game from the first round that caught my eye. 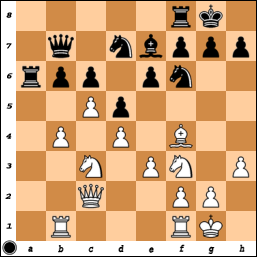 This was the position after 15.Qc2 from the 4th rapid (tiebreak) game between Grischuk and Aronian. The match featured a bunch of various QGDs, but this was one was interesting to me because I have played this line from both colors and spent some time making a more thorough study of the position last spring before the US Championship (where I played the QGD for the first time).

I hadn’t looked at the exact move order used in this game, but I had noted a number of plans for each side (and how to counter them) for a very similar position. Here’s what I had in my notes as of March 2010 (no post-game editing!), regarding the following position:

“(1) There’s no rush to play …b5 for Black after the bishop exchange on d3. He should be careful not to allow a strong b5 push (as in Nakamura-Bruzon), but if he’s somewhat vigilant, that shouldn’t be a problem.

(3) If White plays Ra1-b1, which is the most common plan, then Black should exchange on d3 and b4. Then I think he should continue with …Ra3 and …Rfa8, holding back on …b5 for the time being. If White brings his knight to e1, then …b5 is solid (see Bhat-Haslinger), and at the latest, Black should play …b5 when the knight arrives on d3. If the knight comes to d2, then …Bd8 seems more useful. When the knight lands on b3, then Black can think about exchanging on c5.…”

So going back to the first diagram, with 15…Rfa8, you could say Aronian has followed whatever I thought made sense. 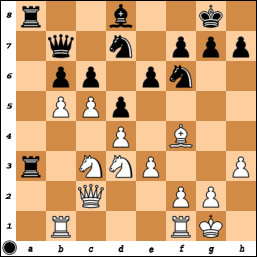 With the bishop still on e7, Black can get away without playing …b5 because the c5-pawn is usually hanging in some way, but Aronian returned to e7 a little late. After 18…bxc5 19.dxc5 Be7, Grischuk’s 20.Rfc1 was good enough for a small plus he later increased, but 20.Nb4! was even stronger.

Not that I’m going to be a second for a 2800 player anytime soon, but I found it amusing that in my notes on this line, I had worked all the plans out pretty clearly (and it seems correctly).

As for predictions, I was surprised by Grischuk advancing over Aronian. However, at this stage, everybody is strong enough that any complaints that it’s a sham now that Aronian is out (I’ve read this is comments in a number of places) is just silly. My own feeling is that of the remaining players, Grischuk would be the most uncomfortable opponent for Anand in the next World Championship, but I have no idea who will advance. Maybe I’ll go with Gelfand and Grischuk, since we’ve had enough K-K battles in the past. I don’t think Kamsky has as good chances against Gelfand as he did against Topalov.

This entry was posted in Uncategorized and tagged Candidates Matches, chess, prognostication. Bookmark the permalink.

One response to “Will Second for Food”