Don’t Call it a Comeback

I’ve neglected this blog recently – I’ve had various ideas of what to blog about, but then I shift back into the lazy gear and don’t actually write anything. Now that I’ve played a couple games again, though, I’ll try and get back on track. (Even this post covers a match from a week ago, but I’m getting there!)

After having played in the USCL from 2005 through 2009, I skipped the 2010 season and I wasn’t particularly certain about playing this year. But with my office moving to just a couple blocks away from the Mechanics Institute and one of the regular SF GMs moving away (Josh Friedel moved to Wisconsin, opening up an extra spot), I decided to give it a go.

My first game back was going to be as black against GM Melik Khachiyan. I was pretty nervous before the game. I had played a handful of blitz games on ICC since August 2010 and no slow games, and I never executed on my grand plans to study before the USCL season. It’s one thing when you’re playing individually, but here, in addition to not wanting to embarrass myself, I didn’t want the team to lose because I missed a mate in 1.

I had expected an Exchange Ruy Lopez, but I guess Melik wanted to change things up from our last (in-person) game. Instead, he went with the Giuoco Pianissimo, and while I had some trouble recalling all the correct move orders, I did get to a position I recognized at this point. During the game, I actually thought this was how my game against Vocaturo last summer went, but it was only a marginally different move order and position. We could have transposed to that after 12.Be3 Bxb3 13.Qxb3 Qd7.

Melik chose 12.Ng3 instead, which tries to avoid the exchange of dark-squared bishops. If White can arrange a setup with his knights on g3/h4 and f5 along with a queen on f3, he’d really like to have that bishop to drop on h6 at some point. I’m not sure that Black has any real way of preventing a knight transfer to f5, and if he plays the position with an eventual …Ne7, he loses some central influence and allows d3-d4. 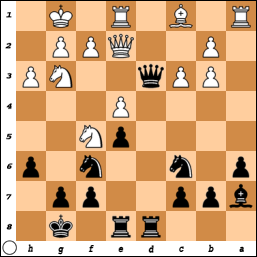 I think Melik got a little careless here, as he played 18.Be3. It’s a natural move and I don’t think it’s a serious mistake, but it allows Black to fix the queenside structure while White’s b-pawns are still weak. Instead, I think both 18.Kf1 (bringing the king closer in advance of the endgame) and 18.Qxd3 Rxd3 19.b4 were a little better. I also considered 18.Nh5!?, but I though that Black’s position was maybe a little easier to play after 18…Qxe2 19.Nxf6+ gxf6 20.Rxe2 Rd1+ 21.Kh2 Kh7 (21…h5 is also interesting).

After 18.Be3, though, I played 18…Qxe2 19.Rxe2 Bxe3 20.Nxe3 a5!, fixing the b3-pawn in its place. The a5-pawn is not so secure at the moment, but it can be supported with …b6 if need be. I don’t think White is really worse yet, but he does have to be a little careful that he doesn’t allow a knight hop to c5. For the time being, that’s not really possible because it would allow a knight into d5 …

Fortunately for me, Melik seemed to miss a slightly unnatural recapture later on. The game continued 21.Ree1 (I’d prefer 21.Kf1 or 21.f3 I think) Rd7 22.Red1 Red8 23.Rxd7?, reaching the position in the digram below: 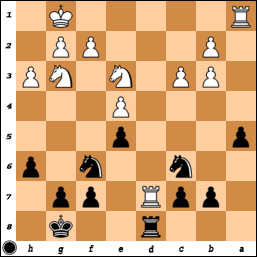 The most natural recapture here would be 23…Rxd7. Black just doubled rooks on the d-file, so this maintains his control of the file while not walking into any pins by taking back with the knight. However, the situation has changed from a few moves ago when I said that Black shouldn’t allow a knight into d5!

After waiting a few more moves for White to make some kingside weaknesses and bring his king farther away from the center, I went to work on the b-pawns.

After 34…Nc1 35.b4 axb4 36.cxb4 N5d3 37.b5 Ne2, I took advantage of the fact White’s king had left f1 to come back and grab the b5-pawn (with …Nd4). The amazing thing is that White’s knights can inflict no damage on Black’s position – everything is well defended! Melik played on for a while, but he never really had any chance to save this knight and pawn endgame and I chalked up the win after 55 moves.

When I started to gain an advantage, the other games were mostly in flux (except for Jesse’s, who I thought was clearly better). But by the time my game had ended, we already had 2.5 points on the board, so this win was the icing on the cake.

On board 2, GM Jesse Kraai was the first to finish with a win over IM Zhanibek Amanov. The full game can be replayed here. He emerged from the opening with a solid plus: 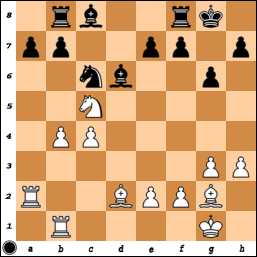 White has just played 19.Rb1, and it’s not clear to me how Black can develop his queenside without further concessions. Amanov was also unable to find any decent way, as after 19…Rd8 20.Ne4 Bc7 21.b5 Ne5 22.Bf4, he was just losing the a7-pawn. Jesse wrapped it up nicely after that.

On board 3, Yian Liou snatched a pawn in the opening against FM Michael Casella, but I’m not totally sure that was a good idea (the full game is here):

Black has just played 8…Qd5-d4, and while Casella’s 9.e3 looks pretty reasonable, I’d suggest 9.d3 instead. After 9…cxd3 10.Nxd3, White is well developed and will gain more time against Black’s queen (and possibly the Be6 too) for the cost of a single pawn. Even after 9.e3 Qg4, 10.e4!? looks more testing to me than 10.f3?!, which needlessly weakened the a7-g1 diagonal. After 10…Qf5 11.e4 Qc5+, Black managed to hang onto his pawn while not falling too far behind in development.

Finally, on board 4, Sam Sevian and Konstantin Kavutskiy fought to a draw in a King’s Indian Attack. The full game can be replayed here, and while much of the game featured long maneuvers, there was one interesting moment I noticed. 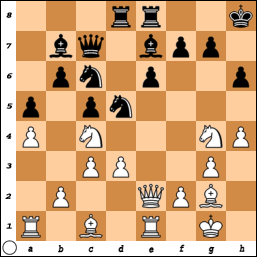 Black has just played 16…Kg8-h8, almost daring White to take on h6. I’m not sure if Sam seriously considered the idea, but instead of his 17.Ng4-e5, which didn’t accomplish much after 17…Bf6, I think he should have taken on h6 with some minor piece.

Probably 18.Nxh6 gxh6 19.Bxh6 is best, as Black’s kingside is ripped open, and the Bishop cuts off squares better than the Knight and doesn’t get in the Queen’s way quite as much. Something like 19…Bf8 20.Bxf8 Rxf8 21.Qh5+ wins (the rook or bishop will use the e4-square to deliver the final blow), while 19…Nf6 20.Bf4! is a surprising resource that highlights all sorts of problems in Black’s position (the b6-pawn, the e5-square, etc). White already has two pawns and is likely to get one or two more, and he might get an enduring initiative to boot.

The final tally was 3.5-0.5 for San Francisco over Los Angeles, and I managed to win in my first game back with the black pieces against a GM. All in all, an excellent week!

3 responses to “Don’t Call it a Comeback”