It’s Been a Long Time

First post of 2012! I’ve managed to go 2 months without writing something here, which is a first for me. Between work, a trip to India (to visit relatives), and the start of some part-time graduate coursework at Stanford, I haven’t found as much time to write as I’d like. I often make grand plans about what I’m going to do but then they fall by the wayside as laziness kicks in.

Today, though, I was playing through a few games from the current RSSU Student Grandmaster Cup (part of the Moscow Open festivities it looks like based on the tournament website) and a few caught my eye. American GM Ray Robson is playing and currently is in 3rd place with 5/8.

His game today, as white against Andrey Stukopin (2460 FIDE) featured some nice tactics. These small combinations were probably not too difficult for Robson to find, but they make a nice impression I think.

Black has just played 17…Nh5?, a novelty according to my now-old databases. It’s a pretty ambitious move: (1) Black puts his knight on the exposed h5-square when White’s queen is still on d1 and (2) contrary to the very “solid” spirit of this Chigorin Ruy Lopez (the Petrosian System, I think), Black is looking to put a knight on f4 rather quickly.

The thinking probably was that something like 18.Bxe7 Rxe7 19.Nxe5 dxe5 20.Qxh5 fails because of 20…cxd4. Unfortunately for Stukopin, he forgot about the little zwischenzug of 20.d5!, making an even bigger threat with 21.d6. After 20…Nc8 21.Qxh5, White had pocketed a clear extra pawn. When playing a move like 17…Nh5, I’d normally double or triple-check that I wasn’t missing something – chess rules are meant to be broken, but not all the time!

Fast forward a dozen moves or so, and they reached the position in the diagram below: 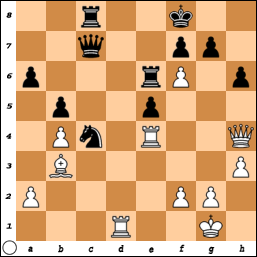 Rather than break through a blocked center, Robson gave back his extra pawn for the initiative. Black’s kingside will be opened up, but things don’t look so dire at first glance. But before opening the kingside, Ray makes use of Black’s weak king!

Another interesting game from today featured a funky knight on h5. This one was between GMs Alexander Ipatov (2586 FIDE) and Yaroslav Zherebukh (2594 FIDE).

Black has played this King’s Indian very provocatively, and once again we see a stranded knight on h5. This time it’s protected, but it has no safe squares to go to. If only the Bc8’s influence on g4 could be removed …

Ipatov seized on this aspect brilliantly, hitting Black with 11.f5!. It’s not so hard to see that taking on e5 leaves the kingside decimated after 12.fxg6. Black doesn’t even have the consolation of having good minor pieces there. So instead Zherebukh played 11…gxf5, possibly thinking that White would have to play 12.Bxf5 when he escapes with 12…Qxd1 13.Nxd1 fxe5 (actually, despite his extra pawn, I think he’s the one still trying to equalize, but he’s close).

Instead, Ipatov played the real surprising move of the sequence, 12.e6!. Allowing something like 13.Rxf5 isn’t a good idea, so 12…Bxe6 is obvious. White then simply played 13.Bxf5!. It’s this concept that really caught my eye – after a trade on f5 (note that Black can’t take on d1 first as 14.Bxe6 is check), the Nh5 is trapped! 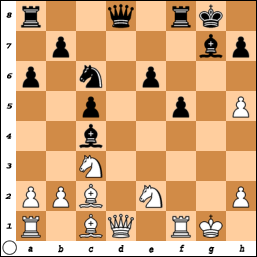 White is up a piece for 2 pawns, but notice how active Black’s pieces are and how many important central squares are in his control. White’s knights have no outposts and I think the position is pretty unclear actually. Ipatov took the other route, trying for a positional masterpiece with 15.gxh5 Qxd1 16.Rxd1 exf5 17.h6 Bh8 18.Nf4. Black’s bishop is buried on h8 (going for something like the live burial of Short – Kramnik, London 2011), but the problem is that unlike that example, the pawn on h6 isn’t completely secure. Black maneuvered his knight to f7 when White was tied to the pawn’s defense, so neither side could play with a full slate of pieces. In the end, Ipatov lost the endgame actually.

Comparing this position to the previous one, we see that Black’s pawns aren’t allowed to advance to e6 and f5 and White’s minor pieces aren’t driven back. That makes all the difference and this position should be a pretty easy win for White.

2 responses to “It’s Been a Long Time”