Not Yet Another Rocky Training Montage

Once again, I haven’t blogged for a while, but recently I’ve actually been spending more time on chess than normal. Why? The USCL season starts the first week of September and then I have the Imre Konig Memorial towards the end of September. It’s also now been about 2 years since I last played a tournament game …

I’ve been playing over some annotated GM games and double-checking some opening lines. While doing that, I came across a sequence that looked pretty incredible to me: 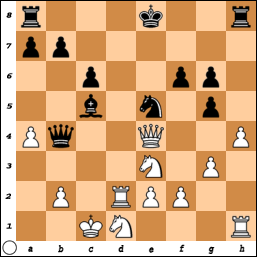 This is from a game earlier this summer between IM Ashwin Jayaram and GM Tigran Petrosian, where Petrosian just played 22…Qb4. Before realizing something was afoot, I had already breezed through the next few moves, so it’s hard to say what I would have done here myself. But 23.hxg5! makes a nice impression either way. It’s not hard to see ahead to 23…Qxe4 24.Rxh8+ Bf8.

White played 25.Rh4! here, which amusingly traps the queen on a centralized square without a ton of material left. The only way to create space is with 25…Nd3+ and after 26.Rxd3 Qe6, White started to move forward with 27.Nc3. 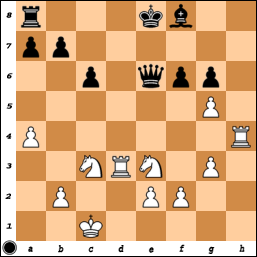 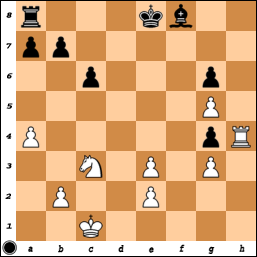 So after all this trouble, White’s reached a position where he’ll be up 2 pawns but saddled with a bunch of doubled-pawns. White eventually converted this endgame in another 50 moves. Anyway, all this means that 24…Bf8 was a mistake and that Black should have played 24…Kf7, which seems to be about equal after 25.Rxa8 Qxa4.

Maybe not the greatest combination ever, but I think what impressed me about this one was the aesthetically pleasing geometry of the rook and knight moves. It also looks like the kind of thing that you really would have to calculate before playing 23.hxg5 – it’s not one of those tactical positions where you can just play the first move on intuition and then worry about what exactly the follow-up is later. Even at the end of it all, it’s not an absolutely trivial win for White.

As for my own efforts, I’ve shaken some of the cobwebs off with a few blitz games on ICC. This was one amusing game, where Black’s position is definitely not a good ad for the King’s Indian Defense: 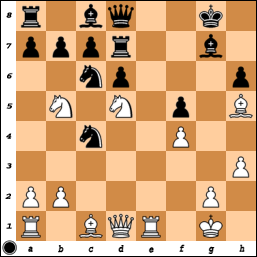 It’s a nice feeling to win a game after a while.

This entry was posted in Uncategorized and tagged chess, Rocky, tactics, ugly opening. Bookmark the permalink.

3 responses to “Not Yet Another Rocky Training Montage”