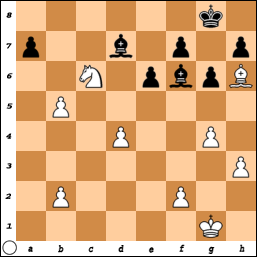 Taking the a7-pawn (and giving up the d4-pawn) was by no means a trivial win (and it might well still be within the drawing margin). By threatening g5 though, White essentially forces Black to take on c6 (going back to h8 allows Ne7#, while Bg7 leaves the d4-pawn on the board).

But after 30…g5 31.h4 gxh4 (this doesn’t fundamentally change things) 32.g5 Bxc6 33.bxc6, Black has to retreat to d8. Now his bishop is tied down and his king is boxed in. White just walks up, takes h4, then walks over the queenside, and pushes his pawn through.

Instead, bad form is playing moves like 22.Nd6? in the one below: 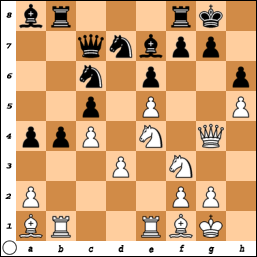 Grischuk just drops a pawn unprovoked – no time pressure, no unseen threat, just a very simple tactic – 22…Nxce5 23.Nxe5 Nf6 and Black is up a clean pawn – the fact Gelfand could only draw the game despite some huge advantages speaks to his poor form more than the loss to Aronian from the above position I think.

As another example of poor form, I’d offer the Leningrad Dutch between Radjabov and Ivanchuk. A known line (with an undisputed plus for White by virtually everybody), one pawn exchange later, and Ivanchuk was essentially just lost in one move. Coupled with the crazy, caveman-style attack he launched the next day and repeated brushes with hanging flags, and I think it’s safe to say that Ivanchuk isn’t handling the tournament so well.

So Gelfand and Ivanchuk are in poor form — with Chucky, it’s not so unexpected, but Gelfand has been pretty solid at least, and occasionally more (when winning a FIDE Grand Prix event, which counts for the next candidates tournament).

Radjabov and Grischuk are in subpar form as well it looks like. Svidler I think will do fine in the event (although his loss to Magnus was completely bizarre). Kramnik is generally playing well, but he hasn’t been able to take advantage of his small windows of opportunity in the same fashion as Aronian and Carlsen.

I think it’s rarer to play yourself into bad form within a tournament than the opposite, so there’s some hope for that bottom quartet. Their play has been spotty at best, while their time management has been atrocious, maybe even more atrocious than normal. So I’m hoping they rediscover some of the form that earned them these spots, but I still expect Magnus to win this event when it’s all said and done.

This entry was posted in Candidates 2013 and tagged Aronian, Carlsen, chess, Gelfand, Grischuk. Bookmark the permalink.

5 responses to “Thoughts After One Trip Through the Lineup”