We’re already past the first round of the USCL playoffs, but as I haven’t written about any of our prior matches, I’ll have to fill in the back-story over the next few weeks. In the meantime, SF has advanced to the Semifinals!

Like in 2011, we were facing the LA Vibe, but unlike that year, we had draw odds in the match by virtue of winning the Pacific Division pretty handily. Our lineup was youth heavy with me as the elder statesman (!) on board 1 followed by GM Daniel Naroditsky, FM Yian Liou, and Siddharth Banik.

On Board 1, I had the black pieces versus GM Melik Khachiyan (follow link to play through the whole game). Melik and I have played a few times before, and in both games with the black pieces, I chose 1…e5 (one Ruy Lopez Exchange that was drawn and one Italian Game that I won). This time around though, I decided to mix it up with the French and even more so, with the 12…d4 version of the Winawer Poison Pawn.

While I’ve long played the French against 1.e4, I didn’t start out playing the Winawer and this actually marks the 4th time that I’ve played the Poisoned Pawn Variation. I started with the 3.Nc3 Nf6 lines, switching over to mostly the Winawer starting in the mid-2000s. But after becoming a GM, I went back to 1…e5 (which I played before the French), albeit with the Lopez instead of the Petroff or other lines. All this is to say that when another annotator writes something like, “Vinay Bhat is a French, in particular, a Poisoned Pawn devotee” (when annotating 1 of the now 4 Poison Pawn games I’ve played), take it with a grain of salt. 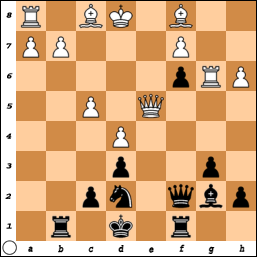 At this point though, he sank into deep thought and about 25 minutes later played 17.Qd6?!. It’s a somewhat understandable decision, as if White doesn’t try to trade now, he probably won’t get another chance for a while and White’s king will be in the center for a long time. Black’s general idea on other moves is to play something like …Nf5 and …Rd8, maybe with …Nd4 or …Bd5-c4 to follow. But after 17…Qxd6 18.exd6 Nf5 19.Rb4 (else …Nd4 would be painful) Nxd6, White no longer has an extra pawn, is behind in development, and is saddled with a worse pawn structure. After 20.a4, it was my turn to take a long think for nearly 30 minutes.

I wasn’t entirely sure what to do here – my first plan was to try and stick a bishop on e4, but tactically it doesn’t really work after Rd4 and Ba3. There were some random ideas that if White played Kd1 to guard the pawn, then something like Be4 Rd4 Ke7 Ba3 Rc5!? Bxc5 bxc5 would be possible, as the Rd4 is actually trapped, but it’s a bit random. The computer seems to love 20…Ke7 here, but 20…f5 as I played, just grabbing more central squares, looks pretty natural. Black will have the e4 and d5 squares, and his king will have an outlet on the kingside where White’s potentially dangerous pawns live. 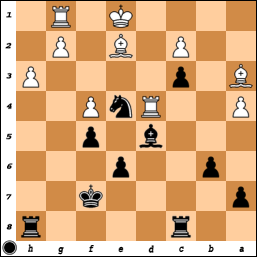 Some time later, we arrived at the following position. I had just played 24…Rh8, provoking 25.h3, and my original plan was to play 25…Rcg8. I originally thought that would win material, but then I realized 26.Rd3 covered the h-pawn and potentially threatens Bb4xc3. That’s not actually the end of the world, but 26.Rd3 Bc6 27.Bb4 gets rather strange in a hurry. Instead, I played 25…Rcd8. On the one hand, I wanted to dissuade him from playing Rd3 (I generally have ideas of …Ba2 or …Ba8 to try and get the d-file and leave myself with the more active rook), but I also wanted to shore up d6 because that Ba3 isn’t doing much but hoping for a chance to get to e5.

Up to this point, I think Melik held things together pretty well – White’s a bit worse, but I didn’t feel like I was close to winning after a regrouping like 26.Bc1 and 27.Be3. Instead, he played 26.a5, which I didn’t totally understand but we were both getting low on the clock (he had 9 minutes left to my 8, along with a 30 second increment). I thought the open b-file was more likely to benefit me, so I just snapped the pawn up.

After some random, time-pressure induced, maneuvers and then a seemingly desirable light-squared bishop trade, we reached the following position:

As for the other games, Yian’s generally done well for us in the league, but he struggled in this match, maybe partly (or largey) because he’s a junior in high school now and doesn’t seem to have quite as much time for chess as he did. He had lost his game before mine reached a decisive position, but then within maybe 10 minutes of my game finishing, both Danya and Siddharth polished off their opponents for a 3-1 Mechanics win.

Next week we play Miami, who will get to select which color they’d like to have on Board 1 because they finished ahead of us in the regular season. Having made 3 Finals appearances, they’re one of the traditional powerhouses in the USCL, and the have actually eliminated us in the playoffs every time that we’ve faced them! So with GM (and USCL-superstar) Julio Becerra and the rest of Sharks looming in that match, the SF team will have their work cut out for them.

This entry was posted in USCL 2013 and tagged chess, Los Angeles, USCL. Bookmark the permalink.