Can an Old Tiger Change His Stripes?

After last year’s debacle in the World Championship, I wrote that I saw retirement in the near future for him. I even gave interviews to the same effect … But I was quite wrong about that, and I was quite wrong in my prediction that he wouldn’t do well in the Candidates Tournament. Not only did he do well, but he qualified for a rematch with Magnus!

Still, despite that win and another tournament win in Bilbao in the fall, I wasn’t holding out a lot of hope for him in this match. Given his improved form and Magnus’s more inconsistent form this year, I thought it’d be a more competitive bout than last year’s match. But despite that, I had in mind +2 for Magnus with 0 wins for Anand.

Like last year’s match, we’re at a 2-2 tie after 4 games, but the 4 games this year have been quite different than last year’s set.

First off, I was happy to see Anand play 1.d4 instead of the 1.e4 he essayed for most of last year’s match. For all my bad predictions this year, I did write this last year:

“As White, I don’t think Anand can play 1.e4 and hope to make headway versus the Berlin. What does that leave? I don’t 1.c4 will be a good option for him, so 1.d4 is what I’d expect to see.”

A 5.Bd2 Grunfeld got interesting in a hurry and while Magnus was allowed to press near the end, Anand’s defenses held. Magnus played quite well to defuse White’s initiative and in his trademark fashion, pounced on minute inaccuracies to generate real pressure.

In the following position, he played 42…Re2 when a lot of postgame commentary focused on 42…Re3 (threatening 43…Rxa3+ 44.Kxa3 Qb3#!). The analysis of 43.Rd7+ Kh6 44.Rxb7 Rb3 45.Rxb3 axb3+ 46.Ka1 Qxh2 seemed to dominate the proceedings, maybe because many engines like the idea of winning a pawn in the short-term, even though White’s king is horribly placed and his queen is tied to the 1st rank. I think that many claimed Magnus missed a win here on the basis of this, but it’s always easier if your opponent doesn’t resist very much.

Instead, 42…Re3 43.Qd1 leads to a R+P endgame that certainly isn’t the most pleasant, but one that I’d guess is still objectively drawn. A suggestion on ChessBase to play 43…Qxd1 44.Rxd1 Rb3 can be met with 45.Rd8 (discouraging 45…Kh6) and Black’s potential progress here should be quite limited. Maybe 44…Kh6 is better (as I think I saw on chess24), but even then, White can liquidate most of the queenside at the cost of his f-pawn after 45.Rd4 b5 46.Rb4. Not trivial to draw I suppose, but definitely not a clear missed win.

So a mixed game for Anand – his opening choice was an excellent one, and he defended pretty well when he had to, but he also somewhat imperceptibly slipped from an equal position into a clearly worse one.

This game was very worrisome – while it’s nice to be right with the predictions, it’s also no fun for me when it’s against Anand. First off, Magnus dropped a very deep idea in the opening: 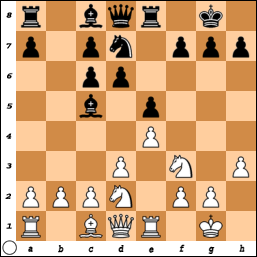 White’s position doesn’t look very active, but in short order, it was clear who was going to dictate play. White’s next moves with Nc4, a4, Nxb6, d4, and Ra3! To me, though, the strange thing was Anand’s play from about the following position onwards.

Maybe …Rd8 was already a small mistake as White’s queen wants to go to h5 anyway (and the rook adds little to nothing from d8) but Black’s play from this point forward seemed very familiar to me in all the wrong ways.

When I’m playing poorly (and not hanging-pieces-poorly I mean), I often get into positions where I’m under a little bit of pressure and start burning up a lot of time. My thought processes are very focused on each move in question without much concern for how my pieces are interacting, what I would like to be doing, etc. I end up fixating on a single factor in the position and “solve” that problem, only to see new leaks surface in my position after each subsequent move. After the fact, I wonder what it was I was thinking about and calculating all that time, because it’s as though I kept dealing with only one of my opponent’s ideas at each stage.

This “playing move-to-move” problem is what I thought I saw in Anand’s play from here on out. The danger should already be clear – White’s amassing forces on the kingside and Rg3 is the obvious next move. And then if Black plus the g-file with his knight, it’s also pretty obvious that White can consider using the h-pawn as a lever to open it back up.

So instead of starting to chase White’s pieces away (with …Qf7!) or trading off the attacking knight (…Bxf5, still unpleasant), he played 18…Be6?! after about 6 minutes of thought. After 19.Rg3 (what else was he expecting), he thought for 10 minutes before playing 19…Ng6. Then after 20.h4, he thought for 20 minutes before playing 20…Bxf5. Already at this point, the position is very unpleasant and maybe Stockfish could save it against Magnus, but most mortals wouldn’t have a hope. But what was the plan after 18…Be6 to begin with? Nothing White in the immediate aftermath could be considered too surprising, and players much weaker than Carlsen could probably have played all the same moves for a while.

Mark Crowther at TWIC wrote that there were “ominous” signs for Anand after this game specifically, but he didn’t mention what I thought was really ominous  about the start of the match: Magnus had played quite well in both games. Compared to last year then, when he didn’t start very confidently and still won 3-0 in decisive games, it wasn’t looking good.

What the heck?! I checked on the game soon after waking up and instead of seeing a live broadcast, it was already over. Worried, I went through the game and realized Anand won?!

Not to toot my horn too often here, but I did say the following in previewing last year’s match:

“On the Black side, I think Magnus will stick with the Berlin as Black against 1.e4, and the Nimzo/QGD as Black. Besides that, I’ll guess at the …a6 (Chebanenko) Slav.”

And a QGD (via the Nimzo move order) it was. This QGD line is sort of known, although it’s more typical after 8.h3 instead of 8.Bd3. Actually, in South Africa where I played recently (more on that later …), I faced 8.h3 against GM Sahaj Grover.

As the 2nd game of the day after a grueling 5-hour defense against GM Eric Hansen in the morning, I was debating what to do here. In the end, I decided against the normal …b6/…a5 setups, because I thought that the Bxa6/b5/c6 plan was too dangerous for me to figure out over the board when I didn’t remember all my analysis. [As an aside, I think that aggressive plan is more typical after 8.h3 instead of Anand’s 8.Bd3, which is why I thought twice about playing …b6 and …a5.] So instead, I improvised at the board and played 8…Ne4.

Magnus, however, saw 8.Bd3 intsead of 8.h3 and played in the usual style but without seemingly adequate preparation. My uneducated guess is that the line still isn’t actually that bad for Black, but it is better suited for correspondence players than for humans to figure out over-the-board.

Obviously the win was huge for Anand in that it leveled the match, was his first Classical win over Magnus in years, etc etc. But it also continued what was seen in Game 1 that he clearly came to play at least as White this year, and that given an advantage, he could seal the deal.

Alright, alright – I have to get in one more “Vinastradamus” prediction from last year’s preview.

“So against 1.e4, I’d suggest the French (!). That’s not because I play it myself, but because the French often leads to somewhat irrational positions where I think concrete preparation might make more of a difference.

Probably the Sicilian is more likely though in reality, and there I’d say that the 2…e6 Sicilian is a better option than the 2…d6 Najdorf.  Meanwhile, 1…e5 is probably also more likely than the French in reality, but with some different lines back in play for Anand. The Closed Lopez and Berlin aren’t great ideas for this match in my view, but the more concrete Archangel lines that he used to play are what I’d guess at.”

Anand finally moved away from the Berlin in this game (and I hope for the remainder of the match). From what I read, he was quite happy with his play in this game (while Magnus was seemingly disgusted with his own play), but Anand still seems a little too willing to accept small weaknesses in the name of simplifying things.

In the above position, moves like …Qb7 and …Bb4 (with …Ne4 down the road) look pretty normal and ask White to react a little bit at least. Instead, he played 19…Be4 20.Bd4 Nh7 21.cxd5 Bxd5!?, saddling himself with a weak c6-pawn and losing some of his prior activity.

In the end, it did work out for this game. But in last year’s match where he went from 2-2 to 2-4, his willingness to suffer slightly essentially turned into a willingness to lose, so as a fan, I’d rather not see that again!

With White, he’s getting positions much more to his liking with 1.d4 than he did at almost any point last year. He might not quite be Magnus’s equal anymore in equal positions, but he also hasn’t been one of the very, very top players in the world for 20 years for nothing.

So in my view, the opening choices have been all good besides the Berlin in my view. I’d still like to see an Archangel from Anand as Black, but I suspect Magnus will switch away from 1.e4 quite soon. I also wouldn’t be surprised to see Anand play into a Scotch with 1.e4 down the road as white.

As for any score predictions from here on out? I’ll try to refrain for the moment …

5 responses to “Can an Old Tiger Change His Stripes?”