Even later on, instead of 28.Bxb7 which immediately simplified into a drawn endgame, Anand could have kept things going with 28.g3 Nc6 29.Bg4! f5 30.f4! when things are far from clear. Admittedly this sequence with Bg4/f4 isn’t the most obvious, but Anand would normally be up to the task.

The issue of nerves didn’t come up in this press conference (and he wouldn’t have admitted to it anyway I’m sure). Either way, I did tell my friend GM Josh Friedel that his play in this game reeked of nerves. After getting a small plus in the transition to this endgame, Anand burned up minute after minute on the clock and was way behind by this point. Given the choice of assessing this endgame after 28.g3/29.Bg4/30.f4 or after 28.Bxb7, I’m sure he’d easily see that White is pressing in one and not in the other, but under the pressure of a real World Championship game, he blinked and played 28.Bxb7. While I’ve been wrong on many of the openings, I’ll at least derive some satisfaction in the profiling department from his admission after Game 11 that he wasn’t able to hold his composure well in this match and that cost him in that game as well.

In Game 11, Anand went with the …Kc8 Berlin endgame line – this was the line that Kramnik chose against Kasparov in 2000 and it’s riskier than the more popular …Ke8 setups used these days. So at least he did do something a bit more combative within the confines of the Berlin. And actually, he definitely outplayed Magnus in the ensuing queenless-middlegame, punctuated by the brilliant 23…b5!. After the ensuing pawn exchange, they reached this position with Black to play: 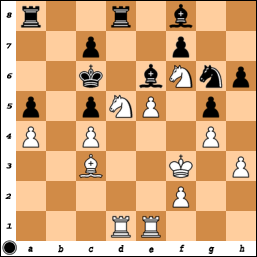 Anand played 26…Rdb8 here, which isn’t such a bad move, but there was definitely a viable alternative in 26…Be7. Magnus missed his chance to take this bishop earlier when he should’ve been playing for equality, but now doing so leaves the c4-pawn weak and the d5-outpost can’t be re-established.

On the one hand, the a4/b3/c4 pawn chain in the Berlin is great while it restricts Black’s majority, but as soon as Black’s light-squared bishop gets a sniff of activity, the pawns are all weak. In my one Berlin endgame back in 2002, I got into precisely this predicament against GM Zhang Zhong. There, I happened to break through on the kingside and won a drawn minor piece endgame thanks to a miscalculation from my opponent.

So 26…Be7, simply threatening to take on f6 and then on d5 (leaving Black with a clearly better endgame thanks to his better pawn structure and White’s lack of inroads on the kingside) was a good alternative. White should probably play 27.Ne3 and try to hold his pawns together. But 26…Rdb8 wasn’t such a bad move either, if followed up differently.

As everybody who’s looked at the game has probably realized, 27…Rb4 was a bad idea. Instead, 27…Rb3 would’ve been the normal follow-up and if Anand wanted to sacrifice an exchange, he’d have had a golden opportunity after that rook move. The move they discussed after the game was 28.Rb1, which would’ve reached the position below:

They didn’t seem to talk about 28…Ra3, but the threat against a4 essentially forced 29.Ra1. But then 29…Rxc3! 30.Nxc3 Bxc4 puts White under serious duress. Probably White should still draw this game, but Black’s moves look pretty obvious at this point while White’s optimal defensive setup is not clear.

That actually motivates the weird-looking 31.h4 a bit. The idea is to soften up the g5-pawn so that White’s king has an outlet on that side of the board. Meanwhile, …gxh4 allows the consolidating f4 and …Nxh4 takes the knight offside and releases the pressure on e5. That might even be White’s best option here, and it’s about equal after that point, although Black’s moves again are pretty simple after 31…Bg7. 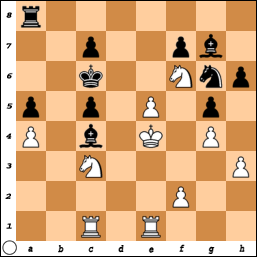 Anyway, after the natural 31.Rac1 Bg7, we reach the above position. The same problems still exist for White here. 32.Ncd5 and 32.Nb5 both allow 32…Nxe5, although after 32.Ncd5 Nxe5 33.Red1, White fights to maintain his knights on d5/f6 for a bit longer. That causes some simplification with the minor piece situation and gets White’s king out of danger. But Black will likely come out with a material advantage of some kind – either two pieces for a rook or an extra pawn with equal rooks.

That’d have been interesting to see develop … but after 27…Rb4?, Magnus grabbed the material and ran to the bank without missing a beat.

For Anand, the match was definitely an improvement over last year, but it wouldn’t have taken much to pass that debacle. Given how he lost the match (mistakes on the board, but generally caused by weaknesses not on the board), it seems very unlikely he’ll win another World Championship match. Luckily for him, he gets seeded directly into the Candidates, so he will get another crack at qualifying. Qualifying again also seems unlikely, but not facing Magnus and in a tournament setting might still give him a shot if the rest of the field lines up in specific ways.  He still knows how to play a little bit.

For Magnus, he managed to win without showing his best chess, the typical hallmark for a champion. He started off stronger in Games 1 and 2 than he did last year, but after getting hammered in Game 3, he also lost his way a bit. He’s ambitious and ultra-competitive enough to want to cross 2900 and really dominate the record books, so who knows, he might start utilizing his team more to develop more openings. He gets some time off now to do that as well, since he won’t have to defend until at least late 2016. With Caruana closing in on his rating, Grischuk crossing 2800, and maybe some new challenges from players like Giri, Vachier Lagrave, and So, I’m hoping he can rekindle some of the older (actually younger!) Magnus and raise his chess to new Olympian heights.