The Candidates tourney really snuck up on me this year – for the first time since starting this blog, I didn’t manage to get off a set of proper predictions for such a major event!

Through three rounds, I’m quite happy with the standings even though they’re not at all what I would have expected:

I wrote earlier that I didn’t have high hopes for Anand in this event. Even after a very nice win in Game 1 against Aronian, I was hesitant to say that the tournament would go well. And while I’m still not entirely convinced that he’s back to 2008 form, the subsequent two games against Topalov and Mamedyarov suggest that he’s at least in good form. I guess you could say I’m cautiously optimistic …

These two wins don’t seem to me to be due to opening preparation – rather, he’s taken what his opponents are giving him and playing simple, strong moves. His pieces are flowing across the board.

For example, in his game with Aronian, they reached the following endgame position: 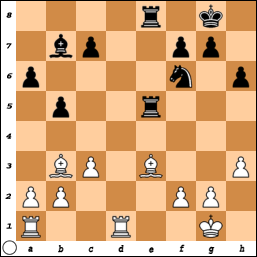 With straightforward but forceful moves, the pressure was ratcheted up after 23.c4! c6 24.Rac1 R5e7 25.a4!. After some exchanges and a few improving moves, the following position was seen: