After notching my first in round 6, I was hoping I had turned the corner, but in round 7, I was knocked back down by GM Jaan Ehlvest (2591 FIDE). Ehlvest and I have played a number of interesting games – this was the 5th game between us, and the 4th where he had the white pieces. The first two times around, I outplayed him in different lines of the French Defense, and since then, he has not tried 1.e4 against me.

The first few opening moves were the same as in my game against Altounian from round 4 (1.Nf3 d5 2.g3 c6 3.Bg2), and I decided to go with the …Bg4 setup instead of the …Bf5 setup I used in that previous game. I wasn’t expecting the King’s Indian Attack (Jaan can play just about anything), and I had not really reviewed the opening phase of that game in between, so I figured he had found what both Altounian and I suspected was there (a small advantage for white). Unfortunately, what I tried in this game also didn’t quite equalize.

White has played the KIA with c4, cxd5, and then Qc2 and e4. With a little more space and central control, White has a definite plus. It’s nothing amazing, but Jaan likes to work with small positional advantages like this and it was definitely not what I was hoping to get from the opening. In the two games where I had the most success against him, I had quickly created dynamic imbalances and then outplayed him in complications later on. Here, I’d have to sit and defend for a while – not something I’m unfamiliar with, just not something that I’d like to do.

White has just played 19.b2-b3. I thought I had done well to get here from the first diagram above, as the bishop exchange has relieved some congestion and the flank pawn moves (…h6 and …a5) have covered my knights against some annoying threats. Still, White has the more space and a more harmonious position. Black’s main question is how to finish his development and I didn’t answer this properly.

I played 19…Qc7, and after 20.Nf5 Rad8 21.Bf4, I went back to c8 with the queen. Jaan didn’t increase the pressure accurately, and that is why I equalized later on.

END_OF_DOCUMENT_TOKEN_TO_BE_REPLACED

The first three rounds were a real struggle, and rounds 4 through 6 weren’t too big of a change. I did manage to avoid losing, though, so that was something.

In round 4, I got my third black against IM Levon Altounian. This was my 6th time playing him since 1998, and my fifth time with black. The previous four times featured a Petroff (a draw), a French (a win for me), a Reti (another draw), and a Slav (in a rapid mini-match, a win for me).

The opening was a King’s Indian Attack (KIA), and I went with the Lasker System where Black puts his pawns on e6, d5, and c6, while the light-squared bishop gets out to f5. I’ve switched back-and-forth from that setup to the Capablanca System where the pawns go to the same squares, but the bishop goes to the g4-square.

He played it with c2-c4, instead of the more traditional e2-e4 of the KIA, and while it shouldn’t be much for white, it’s probably a bit more pleasant for him in the following position: 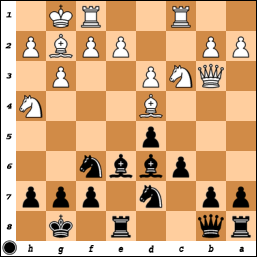 Moving the rook to c1 guards against this, as after 13…Ng4, White has 14.Na4, covering the c5-square. Without …c5, the knight on g4 is just silly. Thus, in the above position, I played 13…b6, taking full control of the c5-square. White noticed the idea and brought his queen back to c2, and then I proceeded to finally develop my queenside with 14…Qb7 and 15…Rad8.

The position was about equal then for a little while, but in playing for a draw, Altounian started to slowly drift into a worse position. In a sterile position, you can just shift around aimlessly, but in an equal position where both sides have potential improvements to make, the draw isn’t inevitable, and so you have to do more than shuffle wood around.

END_OF_DOCUMENT_TOKEN_TO_BE_REPLACED

“Please, a little respect, for I am Costanza, Lord of the Idiots!”

The US Championships ended a couple weeks ago (on May 25th), and I apologize for being a bit slow for writing about that event. It took me a while to come up with the correct title. =)

I’ll start with the finish, and then work my way there from the beginning. I ended up with 3.5/9, tied for 18th place with GM Melik Khachiyan, GM Alex Lenderman, and IM Levon Altounian. The minus-2 result was a big disappointment, as I had been generally playing well leading up to the event, and I had higher hopes for my first US Championship.

The title was taken in tiebreaks this year by GM Gata Kamsky over GM Yury Shulman. Both finished the set of regular games with 7.0/10 (5.0/7 in the main event, and then 2.0/3 in the quad), and by holding a draw with black in the sudden-death tiebreak game, Kamsky won the title.

I knew I would be playing Shulman in the first round (in a closed field, it’s not difficult to figure out where the cut is made), but the colors were up in the air. When Nakamura drew the black envelope at the opening ceremony, it was clear Yury would have the white pieces against me. Not ideal, but so it goes. Shulman and I share a lot of the same openings – as white we both play 1.d4, while as black, we both play the French and Semi-Slav Defenses. Thus, I was a bit wary of walking into some home-cooking and surprised him right away in the opening with the Queen’s Gambit Declined.

There were some interesting middlegame moments, but one of the key moments was when we reached the following endgame:

White has just played 24.h3, creating some luft for his king. However, there is a second idea behind the idea, which explains why Yury chose that pawn move instead of 24.g3. After h3, White threatens to sideline Black’s bishop with 25.g4 and then 26.Ne5. Black’s bishop could come out to e4 then (or f7 if he plays 24…f6), but the real problem then is that while White’s knight can be used to target the queenside, Black’s bishop has no real active prospects. Thus, while 24…Bxf3! might look a bit unnatural (giving up the bishop for a knight in an open position), it is definitely the right move. After exchanging off the bishop, I activated my rook and knight, fixing the weakness on a3 in the process. Eventually, to save his a3-pawn, Yury had to give up his bishop for my knight and then an exchange of a3 for a7 ensued. 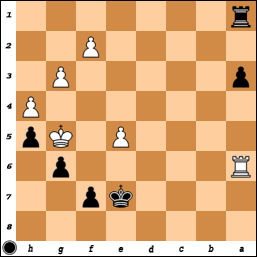 It’s a rook and pawn endgame with equal material and no obvious weaknesses. Furthermore, Black has an outside passed pawn. So what kind of trouble could he ever be in?