On Monday, the SF Mechanics faced off against the Tennessee Tempo. The Tempo have 2 GMs on their roster (Jaan Ehlvest and Alex Shabalov), but I guess neither one was available for this match, and as a result, the Tempo lineup had a much lower average rating than normal. Still, the games aren’t played on paper, and even though we outrated them by almost 150 USCF points at the moment, it was not an easy match.

My own game was the first to finish. I had the black pieces against FM Todd Andrews, who I last faced in the 2008 USCL season (see the post and my annotations here). In that one, Andrews played 1.d4 and the game went into a Semi-Slav. This time around, he played 1.e4, and the game plodded along the normal Closed Lopez lines. The full game can be seen here. 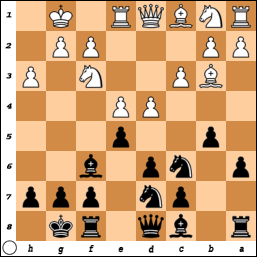 Instead of my usual Graf Variation of the Chigorin (with 9…Na5 10.Bc2 c5 11.d4 Nd7), I played 9…Nd7 10.d4 Bf6, to get to the position above. I’m not quite sure what this is called, but I’ve seen it labeled as the Karpov System in some places, so I’ll go with that. I have played it before, against GMs Friedel and Becerra, but it’s not my main line of defense in the Lopez. Andrews may have been a bit surprised by it and responded with 11.Qd3!? in the above position. White’s dilemma is that the d4-pawn is under serious pressure, so the usual maneuver of Nb1-d2-f1 isn’t available just yet. If White doesn’t want to commit to d4-d5 just yet, then he can either go with 11.a4 (the main line), 11.a3 (Becerra’s choice against me), and 11.Be3 (guarding the pawn, but allowing …Na5 and …Nc4 with tempo). Andrews’ Queen move tries to solve that d4-pawn problem in a novel fashion. I decided to take the game into more traditional Chigorin waters with 11…Na5 12.Bc2 c5 13.d5. After some maneuvers, we reached the following position: 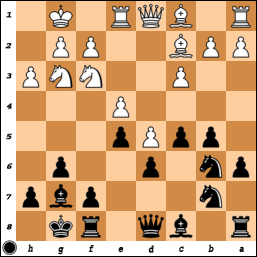 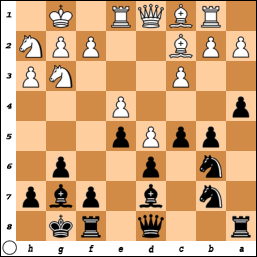 I just played 19…Bc8-d7, developing the bishop and guarding the potentially weak b5-pawn. At this point, White should really be trying to claim some squares. White played 20.Ng4?, which in a way is already the decisive mistake. Strange to say that, but after 20…Qh4!, Black is threatening 21…f5 (now the h6-square is under Black’s control). The game continued 21.Ne3 c4!, with a  clear advantage to Black. It’s a bit odd to have a c4-b5-a4 pawn structure, but Black has now staked out serious territory on the queenside. The knights and Bc2 are stuck preventing …f5, but this leaves the rest of White’s queenside without any prospects. White tried 22.Qf3 Nc5, but felt that he had to play 23.a3, irrevocably weakening the b3-square. I was planning to play …a3 myself if given the chance, since after 24.bxa3, White’s queenside both weak and immobilized. The bishop on c1 can’t move anywhere good without losing the a3-pawn (and the rest of his queenside would be very weak). Thus, Black has a free hand to play …Nb6-c8-e7, supporting the …f5 advance.

Instead of 20.Ng4, White had to play 20.b3, taking the c4-square and some queenside space before it’s too late. After 20…axb3 21.axb3, Black has the a-file, but it’s not especially amazing at the moment. Meanwhile …c4 can be met with b4, keeping Black’s knights from any nice central squares.

The game after 20.Ng4 Qh4! 21.Ne3 c4 didn’t go particularly well for White, as he was powerless to stop …f5. I slowly built up the advance and diverted all my pieces to the kingside, and once that side of the board was opened, the curtain fell pretty quickly.

As for the other games, on board 3, Danya was pretty much always a bit better, but not quite enough to win the game. On board 4, though, we thought we had a good matchup. However, David Justice took out the higher-rated Yian Liou in a pretty solid effort to bring things to a tie at 1.5 points apiece.

That meant it was all down to GM Patrick Wolff on board 1 against IM Ron Burnett. Burnett isn’t so high rated now, but he’s been a solid player for a long time. He was at least equal for most of the game, but as time pressure loomed, he fell victim to some nice knight hops: 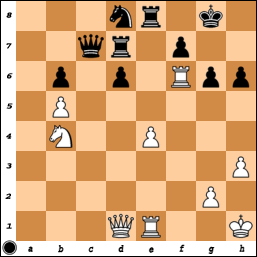 Special thanks to Payam for bringing drinks and pastries to the match for us! After watching the NJ Knockouts sweep a powerful Boston team with the help of some donuts, I figure we could do worse than to copy them.