Last Tuesday, January 27th, I gave a short talk about my trip to Delhi. The game I talked about was my game against Rahul Sangma (which I described here), which I considered to be my best effort from Delhi. The audience wasn’t too big at the start (maybe about a dozen people?), but then grew to be quite large as the Tuesday Night Marathon crowd came in. I ran a little over the time limit, and so all the games started a few minutes late because of me. Oops.

Prior to that lecture, Sam Shankland, Josh Friedel, and I all received our official FIDE title certificates from John Donaldson. Sam got his IM title by tying for first in the World Under-18 Championship in Vietnam in 2008, while Josh and I both got our GM title certificates.

Here’s the picture, to commemorate the occasion: 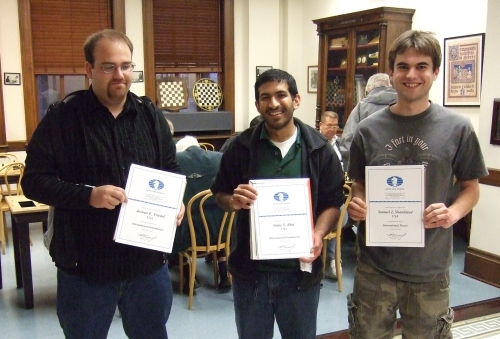 After we received our certificates, Jesse Kraai, who completed his GM title in 2007, welcomed us to the club by saying “Now we’re colleagues!” I guess we’ve finally been accepted into the GM House … 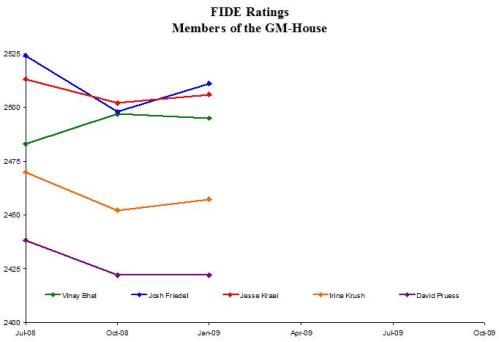 Here are the rating changes of the current members of GM House:

We generally started working together more starting in December, so the fruits of those labors will show up in the next rating list (April 2009). At the Berkeley event, Irina was the only one to gain any points I believe.

Down for the Count

The Berkeley Fight Club concluded it’s 2008 edition a couple days ago, with GM Giorgi Kacheishvili wrapping up first place with a score of 7.5/10. The final standings are posted on the tournament website, here. GM Zviad Izoria took sole second place with 7.0/10. A total of 4 norms were made – IM norms by FMs Daniel Rensch and Marc Esserman (his 3rd IM norm!), and an IM and WGM norm by WIM Iryna Zenyuk.

As detailed in my previous post (here), I struggled in my first four games, only scored 2.0/4 against an average opposition around 2350 FIDE. Things only got worse the next couple days.

In the 5th round, I had the white pieces against fellow GM-house member Jesse Kraai. I would’ve preferred not to play any of my usual study partners in this event, but with such a small field, it would be tough to avoid it. It feels somewhat awkward to play someone you work with so often, and partly more so because I had shown Jesse my general opening repertoire when I first moved in. Thus, the game followed my usual response to the Nimzo-Indian (the Rubinstein Variation), but where I played the Classical Variation instead of the Modern Nge2 line.

In the game, we reached the following position after I played c3-c4 (I had probably already messed it up slightly by this point, as I shouldn’t have allowed his knight to come to e5): 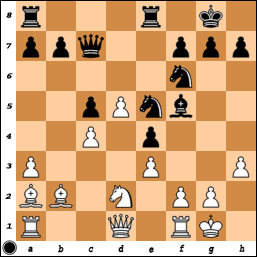 The following day brought more bad news – I was paired with white against the other member of the GM-house troika, Josh Friedel. The game was another Nimzo-Indian Rubinstein Variation, but this time, after 1.d4 Nf6 2.c4 e6 3.Nc3 Bb4 4.e3 0-0, I smelled a bit of a rat and played 5.Nge2 for the first time in my life. Usually I play 5.Bd3 d5 6.Nge2, but I had looked at some of my games in this line with Josh, and prior to this event, I had gone over the key games in the 5.Bd3 d5 6.Nf3 c5 7.0-0 dxc4 8.Bxc4 Nbd7 variation with him. He normally plays 4…b6 or 4…Ne4 against the Rubinstein, so when he played 4…0-0, I realized that he would play something that we had looked at together.

The game was somewhat crazy, but one where I thought I maintained a small advantage for most of the start of the game – after 21…f5, the following position was reached:

Black is down a rook for a knight and pawn, but his knight is obviously magnificently placed on e4. Black has some compensatioin for the exchange in my view, but not full compensation yet. The obvious move here would be to play 22.gxf5, undermining the support of the knight, and that was my original plan. However, on further review, I decided to play 22.g5, thinking it cut the other knight off from f6. To my dismay, 22.g5? was met with the simple 22…Nb8, when White is already in some trouble. The knight on e4 is rock solid and the other knight is going to target the weak d4-pawn. White’s rooks, meanwhile, have no open files to speak of.

The game went downhill for me after that, and although I fought on, I was playing for a draw. However, near the end of the first time control, I got ambitious and decided to play for more with the stupid 37.Kg2?, when the planned 37.Qg4 would have done just fine. Still, the draw was within my grasp and the following position was reached after 42.Qd3+:

When I resigned, I felt absolutely horrible. Not only was I playing badly in general, but to lose in such a fashion was disgusting. There’s an interesting discussion of dealing with defeats at the FIDE website here, where the players in the current Grand Prix tournament were asked how they dealt with defeats in chess. This game mirrored Rajdabov’s answer a bit, where I felt I was better and shouldn’t have lost, but kept making stupid decisions to throw everything away.

So after 6 rounds, I was sitting on a brilliant 2.5 points, down about 15 FIDE rating points, and emotionally down in the dumps. I’ll wrap up the event in another post tomorrow. In the meantime, happy Festivus!