Guess Who’s Back? Back Again

“You have power over your mind – not outside events. Realize this, and you will find strength.”

Your blogger-in-hiding hopes to make a return over the next few weeks, partly to write about the upcoming Anand – Carlsen match, but also because I’ve been playing a few games again in the US Chess League!

I heard about this video from Dennis Monokroussos’s blog (The Chess Mind) and the stretch he refers to in that entry is pretty amazing to watch. Start around 8 minutes in and you’ll see Karpov fidgeting a bit, but pretty calmly resigning and losing the Championship Match in 1987.

I’ve definitely reacted worse to some losses, but maybe given the adjournment break and some time to consider the sizable audience watching, I might have not completely embarrassed myself in his shoes. But not only does Karpov shake hands and sign the scoresheets, he calmly puts his pen in his jacket pocket and starts analyzing the endgame with Kasparov!

Gelfand’s no slouch in the upstanding-citizen department, but when he lost to Anand in the Championship tiebreaks last year, he shook hands, said a few words of congratulations, and then got up and left. No hanging around to figure out where he might have gone wrong or to look at some alternatives. Pretty normal if you ask me, but Karpov reacts like he’s just lost a casual weekend game.

Picking up the Pieces

“Cause Jacob’s golden ladder
Gets slippery at the top
And many a happy-go-lucky saint
Has made that long, long drop”

For whatever reason, those lyrics popped into my head for the finish of the Candidates Tournament. (The full song can be heard here, it really doesn’t have anything to do with this, but that snippet seemed vaguely appropriate.)

[Another aside – I originally started writing this last week, but didn’t get around to finishing it. Instead of shelving a half-done entry like I’ve done so many times, I’ll just force this one out the door.]

If you’re reading this, you probably know how the tournament ended – Carlsen and Kramnik both lost in shocking fashion, and due to the precedence of certain mathematical tiebreaks, Carlsen automatically advanced to the title match with Anand.

As I’ve written here before, I was hoping Carlsen or Aronian would win the tournament. And this was easily the most exciting tournament I’ve ever watched (the only other chess event that compares for me was the rapid playoff between Anand and Gelfand). The quality of play in this Candidates was spotty, but the drama was off the charts (and maybe each likely leads to the other?!). But given how Carlsen ended up qualifying, I’m somewhat disappointed by the whole thing.

Anand’s interview (published at Indian Express), one that has been making the rounds now on some major chess sites, puts it well – it’s fair, as the rules were laid out in advance and everybody knew them, but it’s less than ideal. There are definitely some who confuse those two – the fact the tiebreaks were written down, agreed to, and followed makes it fair in a legal sense, but that doesn’t mean the chosen tiebreaks were good. And I imagine that whenever the next similar event takes place, that part will get a little more attention and be modified.

END_OF_DOCUMENT_TOKEN_TO_BE_REPLACED

Who Are You Rooting For?

Stories have a way of writing themselves. As an example, I give you two games from the 7th round, Gelfand-Kramnik and Carlsen-Radjabov. 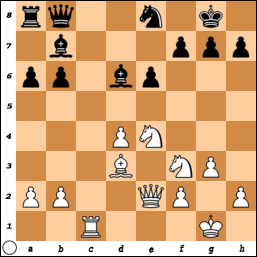 ChessVibes’s writeup has the following: “For a moment Kramnik was in big trouble, but he escaped with a draw when his opponent Boris Gelfand of Israel refrained from playing actively on move 19.”

END_OF_DOCUMENT_TOKEN_TO_BE_REPLACED 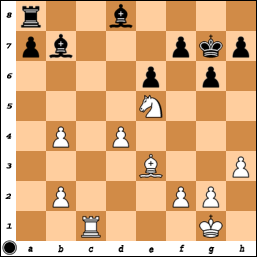 END_OF_DOCUMENT_TOKEN_TO_BE_REPLACED

There was a nice 2-part interview with Gelfand about the World Championship match over at ChessVibes: part 1 is here and part 2 is here.

Here are a few things that I found interesting:

END_OF_DOCUMENT_TOKEN_TO_BE_REPLACED

The tiebreaks featured some very interesting chess and also some bad mistakes. After the smoke cleared, Anand emerged victorious 2.5 – 1.5, retaining the Champion title for a another year or two.

After an exciting Semi-Slav draw in game 1, Anand finally broke through with the Rossolimo in game 2. Anand didn’t maintain his opening advantage, and then instead of bailing out into a pretty easily drawn R + P endgame, Gelfand continued pressing thinking he was better. What appeared on the board was a theoretically drawn endgame, but with no time, I think R + N + P is likely won in such a situation.

Game 3 was the low-point in terms of quality, although there was lots of excitement. Anand went into a …Bf5 Slav (the same opening of his ONLY career loss to Gelfand in a rapid game!) and misplayed it and was quickly much worse. Gelfand’s nerves probably betrayed him at this point, as he missed a couple easy wins in the middlegame and let Anand back in. Then Anand, playing on Gelfand’s time disadvantage, re-complicated a drawn endgame and found himself defending instead. A somewhat bizarre R + P finish ended in a draw, with Gelfand blowing a final win when he miscounted moves leading up to a possible Vancura Position.

Finally, in game 4, Anand only needed a draw as white to retain his title. However, he played the opening in insipid fashion, trying to exchange pieces off without making sure the exchanges were favorable (or at least neutral). As he said afterwards, his brain told him not to play that way, but he couldn’t stop his hand. There is one example that remains stuck in my head for this “Don’t Play for a Draw” mentality: Gurevich – Short, Interzonal 1990 where Mikhail Gurevich (Anand’s second/trainer right around that time!) needed a draw as white to qualify for the Candidates Matches. Short meanwhile needed a win. Gurevich played an Exchange French, did nothing, and was slowly outplayed in fine fashion. However, Gelfand may have been a little unsure of himself, and instead of simplying into a 2B vs B + N endgame, he chose to keep a pair of rooks on with the minor pieces, maybe to give himself more material to work with. However, Anand’s rook became a thorn in his side and Anand avoided his former second’s fate and held a draw.

END_OF_DOCUMENT_TOKEN_TO_BE_REPLACED

A Smorgasbord of Match Stats

Game 12 was a draw, although it wasn’t a boring draw I think. Anand’s positional pawn sac was met with a positional double-pawn sac to equalize – in fact, most everybody seemed to like Black’s position in the pawn-down endgame more. Anand again had a sizable time advantage when he offered the draw with 22.Bxe7, but like in game 11, I just don’t see what his plan to continue the game would be. He’s got weak pawns on a2 (because of the …a4 lever), d3, and h4 and Black’s rooks are the more active set. 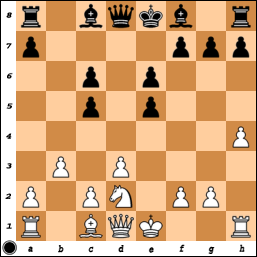 And so the classical portion of the match ends in a 6-6 tie! This has happened before but all-but-one of the previous cases saw the sitting champion retain his title. In 2006, though, Kramnik beat Topalov in the rapid-chess tiebreaks 2.5-1.5.

Anand holds a huge career advantage over Gelfand in rapids – 8 wins, against 1 loss and 19 draws. Still, I don’t think this will be quite as much of a cakewalk as that would suggest. Opening preparation and nerves will be a bigger factor here than in a lot of those rapid games (from Melody Amber tournaments, etc), and thus far and more recently, I’d say Gelfand has had the edge in both areas. Gelfand has his openings in order, whereas Anand has more fundamental decisions to make as to what openings to play as white and black. One good thing about Anand’s play since his win in game 8 is that he’s been generally playing more quickly in the last 4 games.

END_OF_DOCUMENT_TOKEN_TO_BE_REPLACED

Game 11 was a draw, so that leaves one regular game for all the marbles tomorrow. If that one is a draw as well, they go to tiebreaks (4 games of G/25 + 10 sec/move, I believe). And if it’s still tied, they’ll end all the fun with an Armageddon game.

From my perspective, Game 11 featured a couple interesting moments:

Well, we have our first decisive game. The two players went into the 5…a6 Semi-Slav again, and Gelfand deviated with the expected 6.c5.  But Anand didn’t lose because of the opening (even though 10…c4 looks like a faster equalizer to me than 10…cxd4). He lost because he just played the middlegame poorly. I’m not sure he would avoided this result today even if he had switched openings.

Gelfand is now up 1 with 5 to play – can Anand break through with White? I think the idea that Anand was playing himself into form can be discounted now, but the gloves have to come off unless he wants to go down without a fight like Kasparov did in 2000.

At the (Classical) Halfway Point

I had to put Classical in parentheses because if the current drawing rate holds up, the match will go on for more than just 12 games. Lots of people have opined on the state of the match, so I’ll throw my 2 cents onto the pile too.

Have I found the match exciting? No.

Have I found the match interesting? Yes. It’s interesting for me to see how matches develop, what strategies the players are generally choosing, what openings they’re selecting, etc.

In this case, Gelfand’s choices of the Grunfeld and Sveshnikov look inspired to me. They fit his opening style quite well in that both are extremely concrete. Still, I never would’ve guessed that he’d play them. It’s no real surprise to me that Anand hasn’t found much with 1.d4 – his results with that have never been as good, his World Championship win against Kramnik notwithstanding, and it’s a reminder that he’s really been a 1.e4 player for 90% of his career. In the first Sveshnikov, I don’t think he wanted to take any chances – I do expect him to probe there some more, there are a couple recent lines I saw today that might be fruitful. Before the match, I thought his move order progression would go 1.d4 –> 1.c4 (1 game at most) –> 1.e4, but given Gelfand has prepared the Sicilian for the match, I’m less certain about 1.c4 popping up now.

END_OF_DOCUMENT_TOKEN_TO_BE_REPLACED

There and Back Again
Blog at WordPress.com.
Loading Comments...