We’re already past the first round of the USCL playoffs, but as I haven’t written about any of our prior matches, I’ll have to fill in the back-story over the next few weeks. In the meantime, SF has advanced to the Semifinals!

Like in 2011, we were facing the LA Vibe, but unlike that year, we had draw odds in the match by virtue of winning the Pacific Division pretty handily. Our lineup was youth heavy with me as the elder statesman (!) on board 1 followed by GM Daniel Naroditsky, FM Yian Liou, and Siddharth Banik.

On Board 1, I had the black pieces versus GM Melik Khachiyan (follow link to play through the whole game). Melik and I have played a few times before, and in both games with the black pieces, I chose 1…e5 (one Ruy Lopez Exchange that was drawn and one Italian Game that I won). This time around though, I decided to mix it up with the French and even more so, with the 12…d4 version of the Winawer Poison Pawn. 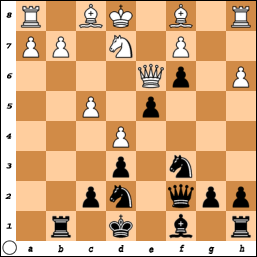 While I’ve long played the French against 1.e4, I didn’t start out playing the Winawer and this actually marks the 4th time that I’ve played the Poisoned Pawn Variation. I started with the 3.Nc3 Nf6 lines, switching over to mostly the Winawer starting in the mid-2000s. But after becoming a GM, I went back to 1…e5 (which I played before the French), albeit with the Lopez instead of the Petroff or other lines. All this is to say that when another annotator writes something like, “Vinay Bhat is a French, in particular, a Poisoned Pawn devotee” (when annotating 1 of the now 4 Poison Pawn games I’ve played), take it with a grain of salt.

END_OF_DOCUMENT_TOKEN_TO_BE_REPLACED

There are a series of norm events planned in LA (the first being an IM norm event later this month) that I was asked to mention here. From the club’s webpage: