After a horrible start in Montcada, I was at 50% after four rounds. The second half of the tournament was a little better than the first, but that’s not saying much.

In round 5, I got my second black in a row against Jonathan Cruz (2437, Colombia). I didn’t find a lot of his games in the database, but he generally seemed to pick the sharp main lines. Thus, I was a bit surprised when he went for the 6.e3 variation of the Slav. Everything in his past games seemed to point to him repeating 6.Ne5, but I guess he had prepared something himself.

The variation with 6.e3 is somewhat testing, but it’s generally considered to be less challenging than 6.Ne5. White often gets a symbolic advantage, but can’t really do much with it. Compared to the main line with 6.Ne5, games with 6.e3 tend to end in a draw much more often. That is how this one ended up, although as it turns out, I should have played on in the final position:

We had been repeating with …Na7-c6-a7 and Nc3-e2-c3 the past couple moves, and this was a chance for a three-time repetition. I was down to about 3 minutes at this point to reach move 40 (along with a 30-second increment). I was tempted to play on, with 33…Qd8, hitting both h4 and a5.

I’m not quite sure what I was afraid of now, as 34.f5 gxf5 35.gxf5 Bxh4 nets a pawn (White can’t take on e6, because after the mass exchange on f3, the bishop on e1 hangs). White has some compensation after 36.Bd2, but Black is definitely playing for a win. Meanwhile, on 35.h5 gxh5 36.gxh5, I remember thinking my position was quite pleasant after 36…Nc6.

I think normally I would have played on here even if I thought the position was equal (after all, I’ve played on in much worse positions, and with less time!), but maybe because of my prior blunders, I decided not to tempt fate in time pressure and just repeated. The strange thing was that when I offered him a draw before finishing out the 3rd repetition, he declined and said it wasn’t 3 times. I was a bit confused by this, but instead of letting my clock run to zero, I just wrote my move down and claimed the draw. The arbiter duly verified the claim.

The next round, I was white against Melkior Cotonnec (2296, France). The opening of this game was completely ridiculous – here’s the position we got after 11.Rh1-g1: 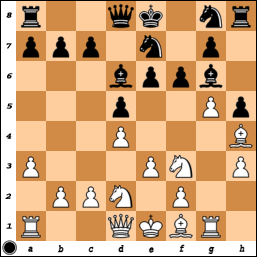 If you look at the pieces from the 2nd rank to the 7th, it almost looks like something that would come out of a Chess960 opening, but no, this game started with the usual arrangement of pieces and 1.d4. During the game, I thought I was a little better now, while after the game, he thought he was doing fine here.