After Kasparov’s retirement, there doesn’t seem to have been much sniping among more than just a couple top players. The one that sticks out was the Kramnik – Topalov match of 2006, but outside of those two, there haven’t been many shots fired I think. If the past month or two are any indication, that’s about to change!

Back in February, Nakamura went on the record in New In Chess that he felt that he is “the biggest threat to Carlsen.” That was the soundbite quote, but there was a bit of nuance in that he really was referring to long-term threat.

He further tempered that in a subsequent interview that can be read here (with help from Google Translate for most of us I imagine) where he says:

“Aronian’s probably a bigger threat than me right now, but outside of him I am right behind. I have a chance. If I do not have confidence that I can beat him, what’s the point of playing then?”

This all happened after Magnus’s Bay Area visit and I also don’t get NIC, so it’s not like I could ask about this, but the 2nd interview above has a shot of Carlsen and Nielsen walking to the Zurich tournament hall with this reaction – who knows if they’re joking about the magazine, but it’s quite the coincidental shot if not! 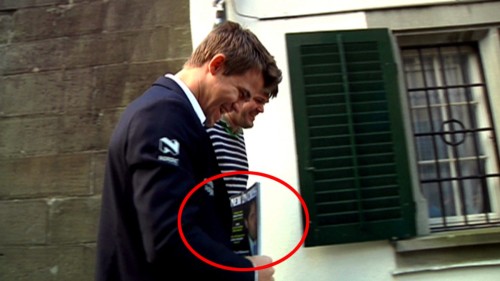 Then this happened at Zurich.