In the Land of the Blind, the One-Eyed Man is King 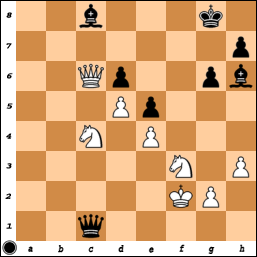 In the diagram above, we have the position from Anand-Carlsen, Bilbao 2010 after Anand’s 46.Kf2. Carlsen now played the very accurate 46…Bd7!, which essentially forces a draw after 47.Qxd7 Qxc4, as White’s king is too exposed for White to have time to grab the d6- pawn safely.

But on ICC, there was a little bit of a debate over the merits of 46…Qc2+. At first, it seemed a few people assessed 47.Ncd2 Qxc6 48.dxc6 as better for White. Drahacik (an FM, I don’t know his real name) then kibitzed, saying that the endgame was better for Black.