Heading into my 7th round encounter with GM Stewart Haslinger, I had 4.5/6 (3 wins and 3 draws). Haslinger had won this event in 2008 with 7.5 points and we had played at Benidorm earlier in the year (a game that ended in a draw). This game was a pretty complicated strategic game, but both of us thought that I had the better position in the post-mortem. In the following position, I pulled the trigger with 29.Bxe6:

Anyways, back to the game, after 34.Rdh1 Re7, we had the following position:

This looked quite good for White, as Black has no entry on the e-file while White can operate on the g- and h-files. One idea is 35.Rh5, for example, when White threatens 36.Rxg5! Qxg5 (the h-pawn is pinned so it can’t move) 37.Rh5 Qf6 38.Rf5, trapping the queen on f6. Unfortunately, when White plays Rh5, Black should play …Ne6, as the Nf4 no longer has the useful h5-square at its disposal. After the game, Haslinger (who was down to a minute at this point), admitted he hadn’t seen the queen-trap idea, but the prospect of him finding it and playing …Ne6, which at least equalizes immediately was too much for me to try it.

Both of us thought at first that White had to have some breakthrough, but I didn’t find it during the game (the game ended in a draw in about 10 more moves) and we didn’t find anything in the post-mortem. The computer gives White a clear plus but just pushes the pieces around without doing anything or the evaluation changing. Looks like it’s just barely drawn …

After my fourth draw in a row, I got the black pieces against GM Karen Movsziszian, an Armenian GM who now lives in Spain. He loves the King’s Indian, and tries to play it with both colors, so I wasn’t totally shocked at his slightly irregular White setup. Still, I got myself into some trouble with my bishop largely sidelined on h7. I stirred up some queenside trouble and sacrificed a pawn to get the following position: 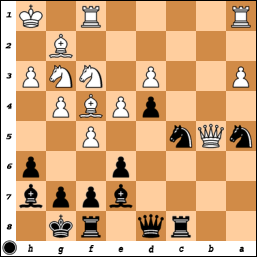 The …Nxd3 shot was the best Black had in the position, but the loss of the d3-pawn doesn’t give Black an extra pawn – it only restores material equality. Meanwhile, his bishop on h7 is rather poor and his kingside is a little open. But instead of regrouping, Movsziszian was clearly shaken. He must have felt a bit like Sycamore based on these lines from P.G. Wodehouse’s Ring for Jeeves:

“I remember seeing this chap Sycamore make a hundred and forty-six in a house cricket match at school before being caught low down in the gully off a googly that dipped and swung away late. On a sticky wicket too.”

On second thought, maybe he thought that without the cricket references (you can see what those terms mean here, on Wikipedia). He was clearly happy with himself after an earlier b2-b4 idea that eventually netted him my b5-pawn (not by force), but the shock of …Nxd3 really threw him for a loop and he lost the thread of the game quite quickly.

This win finally brought me back into the win column and pushed me up to 6/8 going into the last round. In that last game, I had the white pieces against GM Stanislav Savchenko (2536 FIDE, Ukraine). Here’s the position we reached after 12…0-0-0:

As it turns out, this position had been played once before earlier this year (Avrukh-Hector, Politiken Cup 2009), and Hector went on to win a nice game. I offered the draw as I figured that despite my pawn plus, the endgame after 17…Qxe5 18.Nxe5 Rhe8 is easier for Black to play (I think Black is at least equal here), and on a couple hours of sleep, I wasn’t interested in playing to hold a draw if I could avoid it. While I do think I would have held the endgame, he accepted and saved me the trouble, partly because he said he was tired too for the morning game after the late night round the previous day!

Thus, I finished with 6.5/9 (4 wins and 5 draws). That was good enough for 6th place on tiebreaks – GM Andrey Sumets took clear first with 7.5 points, followed by 3 players with 7 points. I’ve played a number of tournaments in Spain before, but this was by far the strongest one. In my 9 games, I played 6 GMs, 1 IM, and 1 FM, for an opponent’s average rating of 2462 FIDE (my performance rating was 2629 FIDE).

The only real negative about the event was that most of the rounds were at 8:30 PM. With one game a day, that’s really too late in the day. I guess they wanted to give locals a chance to do their work and the visitors a chance to go around, but as a visitor without too much to do in the area, that was really too late in the day. It did allow me to get away with my sleep schedule though, so I can’t complain too much.

My next tournament in Navalmoral de la Mata (a small town near Madrid) starts in a couple days. Unlike most European events, it’s on a 2-games-a-day schedule, so it will pass by pretty quickly.