END_OF_DOCUMENT_TOKEN_TO_BE_REPLACED

“The game of chess, is like a swordfight
You must think first, before you move”

I first heard this line from the Wu-Tang Clan’s song “Da Mystery of Chessboxin’,” a seminal rap group that has two members (RZA and GZA) who are chess fans. (The original kung-fu film that opening line sample is taken from is here: http://www.youtube.com/watch?v=3uPAfsrXpp8)

I was briefly reminded of this when playing through one of the games from the ongoing US Junior Championship in Saint Louis. In the second round, Kayden Troff had the white pieces against IM Daniel Naroditsky, and the game started out as a King’s Indian: 1.d4 g6 2.c4 Bg7 3.Nc3 d6 4.e4 Nf6 5.f4.

I’m no expert on this line – I don’t play the KID as black, and I don’t play the 4 Pawns Attack as White – but Black’s next move was definitely new to me. Naroditsky played 5…Bg4!?, and it looks pretty interesting. 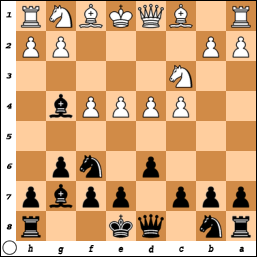 I have seen the 4 Pawns Attack transpose to a Benoni-like position before with 5…0-0 6.Nf3 c5 7.d5 e6 8.Be2 exd5 9.cxd5. There, Black often plays …Bg4 (and later exchanges on f3), as the light-squared bishop is a typical problem piece in the Benoni, while the removal of the Nf3 makes it harder for White to play for e4-e5 later on.

So maybe 6.Nf3 would only lead to something like that, but I think Black might also have a different idea. After 6.Nf3 Bxf3 7.Qxf3 Nc6, there are some issues with the d4-pawn. After 8.Nge2 e5, maybe Black is on his way to equalizing. I’m not totally sure, though. Anyways, Troff could’ve used that Wu-Tang warning to think first.