Audibles at the Line

I finished up my tournament in Navalmoral de la Mata a few days back and am now back in the States. I ended up in clear 3rd place with 7.0/9, a 2632 performance by standard GM norm calculations (the only reason to do this is because in the first round, I played a 1777-rated player).

Unlike pretty much every other event I’ve played in Europe, this was a 2-game-a-day affair. In the US, such compressed schedules are pretty common. I have a feeling that for many of the European players at this event, the schedule was pretty tough. I strongly prefer 1-game-a-day events, but I couldn’t find much on the chess calendar that was both strong and soon after Mallorca.

GM Sergey Fedorchuk took 1st place on tiebreaks from GM Andrei Shchekachev with 7.5/9. Fedorchuk handed me my only loss of the event in the 3rd round. I had some chances for an advantage in that game, but that was probably the closest he came to having any problems. Shchekachev had a bit of an easier road (Fedorchuk, for example, played on board 1 for the entire event!), including a forfeit win in the last round over GM Namig Guliyev. There was a 15-minute grace period for showing up to the games (not the 1-hour that is customary in the US), so he was forfeited at 4:15 PM for the 4 PM round. Every other evening game had been at 5 PM, and he showed up at the tournament hall at about 4:55 PM wondering what happened. Unfortunately for him, his game had long since ended.

I’ve played a bunch of events in Spain over the past few years, and this was unlike most of those in a few respects. I’ve already mentioned the schedule with 2 games per day, but the composition of the event was also pretty distinct. The top of the tournament was reasonably strong – Fedorchuk and Burmakin headed the field, and Fedorchuk has been as high as 2671 FIDE recently (and he took Shirov to tiebreaks in the ongoing World Cup in the second round). At 2510 FIDE, I was the 11th seed. However, after about the top 15 players (around Berbatov at 2463 FIDE), the next players’ ratings just dropped off a cliff. By the time the seeds were in the mid-20s, they were down to 2280 FIDE or so. In a 90-player field, that essentially meant there wasn’t much of a middle in this tournament. There were the guys at the top … and then the guys well below them.

As a result, I had a few rounds where there were some definite mismatches and so rather than go round-by-round, I’ll group the games a little differently. These two games were strongly characterized, I thought, by the fact I changed my normal opening patterns at the board – they weren’t completely new to me, but I certainly hadn’t prepared these lines for those games. However, I smelled a bit of a rat in both instances and so I decided to change my normal play call and in both cases, it worked out quite well for me.

In the second round, I was black against Benjamin Garcia Romero (2233 FIDE). I had played him back in 2007 in Benasque, and in that game, he played 1.d4 and I responded with a Benoni. I ended up outplaying him early on in the endgame to win a pawn, but then made a number of mistakes and almost let him escape with a draw before finally putting him away. When I was preparing for this game, I noticed that with the white pieces in the database games, he performed almost at a 2400 clip, but that as black, he was performing like a 1900! Pretty shocking differential.

Here’s the position we got after the standard main line Closed Lopez moves: 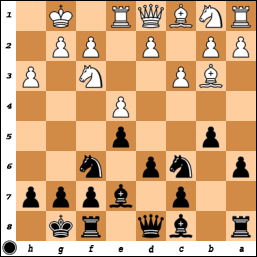 I had been expecting 1.d4 again, so 1.e4 was already a surprise. Now that he wanted to play a main-line Lopez, I had to decided what line to choose. The Graf (with 9…Na5 10.Bc2 c5 11.d4 Nd7) has been my most common choice, but I immediately tossed that out because there are a bunch of forced drawing variations in the main line. The Karpov (with 9…Nd7) was a serious choice, but I had seen that he had played it himself as black, and so I thought he might know the theory there and steer things to one of the quieter, pretty equal lines. Thus, I settled on the Zaitsev, with the …Qd7 line in case he wanted to repeat with Nf3-g5-f3.

In about 235,000 games with the Ruy Lopez that I have in my database, this position has only been reached 14 times! It’s not Black’s “best” line, for sure, but it is somewhat tricky and most importantly, it avoids the repetition. It worked like a charm as instead of the most common 14.Nf1, he immediately went wrong with 14.a4. This is a normal Lopez move, and it seems even more obvious here, as Black’s deserted his queenside with …Rae8, but White runs into some problems with his e4-pawn and d3-square here.

He played 16.Nxd4 instead, but White’s big pawn center is gone, and after 16…Ne5 17.Qe2 c6 18.Bc2 Bd8, Black’s setup was starting to make sense. With …Bb6 later, pretty much all of Black’s pieces are again working well. When White moves his knight from d2, I was ready with …c5, effectively exchanging the b5-pawn for the e4-pawn and activating my light-squared bishop. White never really got into the game.

In round 8, I was black against the young Spanish IM Alvar Alonso Rosell (2507 FIDE). I had decided to play the solid Slav Defense against him, but in the main line after 1.d4 d5 2.c4 c6 3.Nf3 Nf6 4.Nc3 dxc4 5.a4 Bf5, I was expecting only 6.e3 (the only move he had played in previous games). However, at the board, he dashed out the currently more popular 6.Ne5 and I began debating what to do.

Does this look familiar? At least for me, it was! I had the same position with colors reversed in the last round of Mallorca against GM Savchenko (covered here). In that game, I played 6.Ne5, having prepared some stuff against the Sokolov Slav, but he surprised me with this line. I was impressed enough with it to repeat it here.

Rosell sunk into a deep think, which made me happy at least that I had gotten him out of any opening prep and on his own. He continued with 13.Nxe5 (I played 13.Qc1, but that didn’t lead anywhere) Nxe5 14.Qb3. I responded with 14…Qf7, since with the queens on the board, White’s attack will be quite dangerous. After the queen exchange and some maneuvers, we reached the following position where I just got out of check with 21…Ka8. 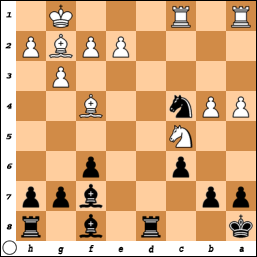 I thought I was ok now, as I didn’t see any way for White to continue with his attack. If he could play b4-b5, opening the long diagonal for his bishop on g2 that’d be on thing, but here the knight on c5 is always hanging. If the knight stays on c5, Black is also planning …a5 to undermine it and give his king added luft. If the knight retreats, say to d3, then b5 decreases in strength because b7 won’t be attacked. After 22.Nd3, I was planning 22…g5!, taking his dark-squared bishop away from him. Then Black’s king can hide back on b8.

He played 22.Na6! here: I had seen this: the knight can’t be taken because of 22…bxa6 23.Bxc6 mate, but I had planned the simple 22…Bd6. I thought I was fine here because the knight is now indeed threatened and going forward with 23.Nc7+ Kb8 doesn’t make any sense.

However, he now really uncorked a surprise on me with 23.b5!!, which he played with only one minute on his clock! There was a 30-second increment, so he wasn’t going to lose on time, but he was certainly in time pressure.

The game continuation, though, let me off, and in time pressure, he made the mistake of trying to press on when he should have taken his foot off the gas and played for a draw. That led him to pitch a pawn in the hope of keeping his initiative going, but I took the pawn and slowly turned his pieces back. The pawn-up endgame was then just a matter of technique, and while I certainly took my time with it, the result was never in doubt.

This entry was posted in Navalmoral 2009 and tagged chess, Fedorchuk, Navalmoral, Spain. Bookmark the permalink.

One response to “Audibles at the Line”