Who’s Afraid of the Exchange Slav?

After my stop for some R&R in London, I caught a flight to Brussels and then got on the ChessBus from the airport to Cappelle la Grande. After last year’s event, I was not so keen on returning (mostly because of the food situation), whereas the other American players in the same group (Josh Friedel, Jesse Kraai, and David Pruess) were generally more interested on playing again. However, one year later, and I’m on the only one of the group who has made it back.

Cappelle is an interesting chess event and in many ways is like none other across the world. The organizers essentially give conditions (free room + food) to most titled players, as well as modest appearance fees for GMs. Meals are served in a mess hall of sorts, where they provide lunch and dinner for hundreds of players every day. Although the prizes are relatively small (the prizes don’t seem to be advertised, but my guess is that first prize is around 2500 Euros), the tournament is quite strong because of the generous conditions. About 100 GMs show up every year, the record being 112 in 2005. While Gibraltar is a bit stronger at the top, Cappelle has much more depth.

The tournament also attracts a number of lower-rated players, and this year there are about 700 players in all. If this was paired as a straight swiss like the US Open, then the top players would be stuck playing way down for a number of rounds. In order to make things more competitive and interesting, they accelerate the pairings. Thus, last year I played a 2350 IM in the first round, while this year, I played a GM in the first round.

Pairings for the first round went up soon after the masses were served their lunch – I got the black pieces against GM Arkadi Vul. He’s an old GM whose rating has dropped quite a bit from its peak, but still, I couldn’t take him lightly. More troublesome than playing a GM, though, was that when I pulled up his games in ChessBase and made a tree to see his opening choices, I noticed that in 22 of 23 games against the Slav, he took on d5 right away!

In Gibraltar, I had to deal with the Exchange Slav in my first round game, and I really seem to get a disproportionate number of them in my games. Well, this time I was having none of it. Instead of my standard …d5/…c6 move order, I played with the Triangle approach – …d5/…e6/…c6. If he wanted to play an Exchange Variation, he was going to have to play an Exchange Queen’s Gambit Declined – White might have better chances for an advantage in some of those lines, but it’s often less boring than the Exchange Slav!

Instead of taking on d5, though, he played an early Nbd2 and e3, and the game effectively transposed into an Anti-Meran with 5.Nbd2. I played my normal response to this system and the game was channeled into an IQP position:

The position is dynamically balanced, and in fact, I almost saw this position as a bit of a mutual zugzwang! Both sides have a couple weaknesses (White has weak pawns on e3 and a3, while Black has a weak pawn on d5 and a weak square on b5), but neither side can really go after them without jeopardizing something in his own position. My opponent had already eaten up a lot of the clock in the late opening and early middlegame phase, and he continued to do so here. It’s not clear what either side’s plan should be, and as a result, this is a position where the time can just tiptoe by without you noticing.

He played 21.Bd3, which looks quite reasonable, possibly threatening 22.Nf5. I didn’t particularly want to play 21…g6, but I also didn’t want to see him put a piece on f5. The long diagonal is weakened, but it’s difficult for White to take advantage of that.

After another long think, Vul slid his king over with 22.Kh1. A somewhat mysterious move and it was accompanied by a draw offer. Objectively, I think the position is balanced, but with him only having 15 minutes (and the 30-second increment) to get to move 40, I decided there was no harm in playing on a bit. I played 22…Rfe8.

I now played 28…a4, trying to wrest control of the c4-square from White. He had already made some unnecessary kingside weaknesses (with g3 and h4), and now I was hoping to get something on the queenside as well. Down to a few minutes, he now blundered with 29.Nc7 – after 29…Bxc7 30.Rxc7, Black has 30…Bh3+!, picking up the exchange. Admittedly, White does have the two bishops and there is no opposite number to White’s bishop on b2. Unfortunately, once the b3-pawn goes, a knight will land on c4 and remove that piece before it gets too strong.

The game continued 31.Kxh3 Qxc7 32.Bb5 Red8 33.Bxa4 Nc4! (one of the bishops will go now) 34.Qc3 Qc8+! 35.Kg2 Nxb2. White is left with only a bishop and pawn for the rook and that’s not enough compensation in this position. Although it took another hour or so, I reined in the full point without any real trouble.

In round 2, I was white against the young German IM, Tobias Hirneise. He had played in Gibraltar as well, and he was on the board next to me while I was playing IM Irina Krush. Amusingly, both games followed the same variation of the Slav (the Sokolov …Nb6 variation), and I was debating whether to copy his opponent (GM Pia Cramling), who was playing the opening moves for white quite quickly. I decided to deviate though, and although I got a better position, I ended up losing – Cramling, though, ended up winning!

Over the past 2-3 years, he had played the Slav, the King’s Indian, and the Nimzo/QID complex, so I couldn’t prepare for everything. I concentrated on the Slav, since that was all he had played the past few months. For better or for worse, he forced me to throw my preparation out the window when he played a KID. In the following middlegame, though, he made an instructive error:

This was a new position for both of us, as while I had never looked at it before, he had just left his preparation on the previous move (and had gained 6 minutes on the clock along the way). On his own, he played 17…g4?, which has been played before, and turns out to be a serious error in my view. I didn’t realize it right away, but after a 20-minute think, I realized how to continue. 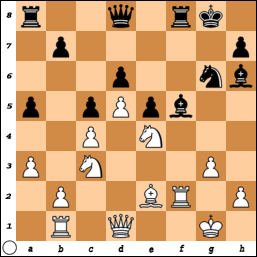 It’s true that his position looks fine at the moment, but after 22.Qd3, what is Black to do? His bishops look nice on f5 and h6, but they’re not actually doing much. Meanwhile, the Ng6 is silly, the Bf5 will be hit soon with Rbf1, and the d6-pawn is under fire from the Ne4 and potentially a Nb5.

On a side note, this incident reminded me of Magnus Carlsen’s response in a recent TIME Magazine interview.

Q: How many moves ahead can you calculate on the chess board?
A: Sometimes 15 to 20 moves ahead. But the trick is evaluating the position at the end of those calculations.

He managed to later get all the rooks off (this wasn’t necessary to allow, but as it happened later on, I wasn’t in the mood to calculate too much at this point and just wanted to cut off any chance of counterplay) to reach the following position: 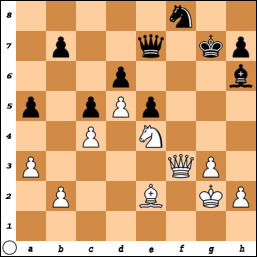 I played 29.Qg4+ Kh8 30.a4!? – this is another luxury, but I figured I could afford it as he can’t keep me out forever. Meanwhile, the pawn on a4 means that …Bc1 can be met with b3, and Black doesn’t even get the small consolation of a queenside pawn. Instead, 30.Qc8 was obvious and strong (planning 31.Qb8 and 32.Nxd6), but I didn’t want to give him anything on the queenside in return.

4 responses to “Who’s Afraid of the Exchange Slav?”