Blitz, Novelties, and the 2011 Berkeley International

The 2011 Berkeley International was wrapped up yesterday morning, and GM Loek Van Wely took clear first with 8.0/10. Arun Sharma did a great job in organizing the event, putting together a bigger, stronger, and better-designed event than the ones I was involved with in 2005, 2006 (only marginally), and 2008.

The tournament was also notable for the large number of norms that were achieved. Two Bay Area talents made what appear to be their final norms: IM Sam Shankland made his 3rd GM norm and FM Daniel Naroditsky made his 3rd IM norm. Congrats to them, and to the other norm winners.

One interesting game I noticed was between GM Davorin Kuljasevic and now IM-elect Conrad Holt in round 5 (Holt won the encounter on his way to his final IM norm). The game was a Slav, and Holt had just played 16…Nc8 to reach the position below:

At first glance, this may not seem like much of an opening success for Black, but White is also somewhat overextended and uncoordinated. The game continued 17.d5 Qxa5 18.dxe6 Nc6. Technically, this last move will enter the database as a novelty (I think, I haven’t updated my databases since August, so maybe it’s been played in the interim), but actually, I beat Van Wely with this move at the US Championship blitz tournament back in May. And to roll things back even further, it’s not even my novelty, having been published by FM James Vigus during the summer of 2008!

After 19.Be3 Nb6, Kuljasevic played 20.Nc3 while Van Wely tried 20.Nf4 in our blitz game. Continuing with my Van Wely game, after 20…c4 21.Bc2 Bc5 (diagram below), Black is already much better as he is better coordinated and doesn’t have the structural problems that White faces on the kingside.

After the tournament had finished, there was a blitz event on Saturday evening. Many of the regular tournament’s participants played, along with a number of outsiders (including me!). It was my first tournament of any kind since August, and I’m not sure I managed to shake off all the rust over the course of the 12 rounds. I played some good games, but managed to throw in enough atrocious ones in-between to keep me out of the winner’s circle.

In the end, GM Robert Hess took clear first with 9.5/12, while a group of 5 players tied for second with 8.5. The one mini-match I lost was to Hess, and I finished with 8 points.

I had two, short tactical encounters punctuated with queen-related tactics in the Grunfeld.

This is from my second game with GM Anatoly Bykhovsky. I lost the first one despite having an extra rook in the endgame, so I was out for revenge. With 13.Bxc4 Qe4? (13…Qc6 is relatively best, but Black’s structure is worse after the queen trade) 14.Bxf7+, Black fell into a simple tactical shot thanks to the potential fork on g5. 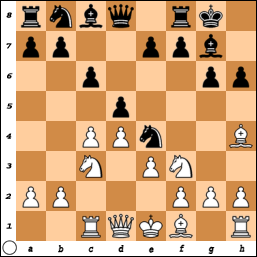 Despite the blitz time control, I managed to put together one nice endgame, against the aforementioned IM-elect Holt.

White played 27.Nd2, and I alertly snapped it off with 27…Bxd2+ 28.Rxd2 Nc4 29.Rc2 Rd4. White’s bishop is not a very good piece in this endgame, while Black’s knight has a bit of potential. It’s not much to work with, but it’s something and I slowly pushed Holt farther and farther back. 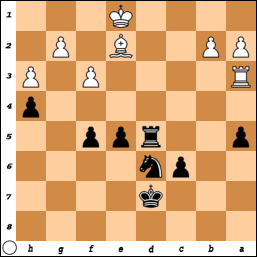 I finished the tournament thinking this was my best game, and a number of GMs congratulated me on the game at the event. However, GM Josh Friedel, on reading this, kindly pointed out that after 50…Rxg2, White has the very tricky 51.Kc3!, when all of a sudden, it’s Black who will be playing for a draw. Sigh.

One response to “Blitz, Novelties, and the 2011 Berkeley International”