The Candidates tourney really snuck up on me this year – for the first time since starting this blog, I didn’t manage to get off a set of proper predictions for such a major event!

Through three rounds, I’m quite happy with the standings even though they’re not at all what I would have expected:

I wrote earlier that I didn’t have high hopes for Anand in this event. Even after a very nice win in Game 1 against Aronian, I was hesitant to say that the tournament would go well. And while I’m still not entirely convinced that he’s back to 2008 form, the subsequent two games against Topalov and Mamedyarov suggest that he’s at least in good form. I guess you could say I’m cautiously optimistic …

These two wins don’t seem to me to be due to opening preparation – rather, he’s taken what his opponents are giving him and playing simple, strong moves. His pieces are flowing across the board.

For example, in his game with Aronian, they reached the following endgame position:

With straightforward but forceful moves, the pressure was ratcheted up after 23.c4! c6 24.Rac1 R5e7 25.a4!. After some exchanges and a few improving moves, the following position was seen:

There’s probably more than one way to improve White’s position here, but Anand kept it simple with 31.Rd3! Nf4 32.Rb3!, starting to make inroads on the queenside.

Then, today, against Mamedyarov, a pleasant Slav turned quite advantageous around the following point:

Anand played 21…Re4, looking to coordinate perfectly with …Qe8/…Rd8/…c5/…Qh5 ideas. His next few moves accomplished exactly that as his pieces flowed to the kingside with tempo (and devastating effect).

Meanwhile, the sequence of the event so far has to be from today’s game between Svidler and Kramnik: 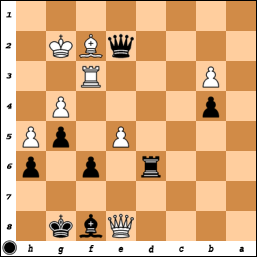 Black appears to be in trouble as f6 is going to fall and he can’t take on e5 with either Queen or pawn. But Kramnik kept his wits about him and found the study-like drawing continuation: 45…f5!! 46.gxf5 Rf6!! and White can’t avoid a perpetual or drawn endgame. Black’s threat is …g4 or …Qe4, and the White queen has nowhere to go that keeps his material/positional plus.

This entry was posted in Candidates 2014 and tagged amazing moves, Anand, chess, Kramnik. Bookmark the permalink.

One response to “Shock and Awe”