I played in Cappelle la Grande in both 2009 and 2010, but I missed it this year. However, I did catch a few games from the TWIC daily game replayer, though, and a few caught my eye.

The first is from a game between GMs Aleksander Delchev and Davit Jojua from the last round. Jojua may have taken a few too many liberties with his development in the opening, and in the following position, he had just played 15…Qb6-b7 (after 13…Qd8-a5 and 14…Qa5-b6!):

Black’s center is both impressive and rickety, but there isn’t an obvious blow to strike against the pawns. At the same time, if Black ever manages to develop properly, the pawns might cease to be a weakness.

So how should White proceed? I’ve known Delchev for a few years now and while chess “understanding” is a tough thing to pin down, this is one example that he seems to have it.

In the above position, Delchev uncorked the amazing 16.Bb5!! – a beautiful move that pretty much finishes Black. There is the immediate threat of 17.Na5, so Black is forced to accept the gift.

Black is completely tied up (the Be7 and Nd8 have no good moves, for example), but how does White increase the pressure?

In another example of somebody taking a few too many liberties in the opening, there was an earlier game from the event between GMs Yuri Vovk and Krishnan Saikiran: 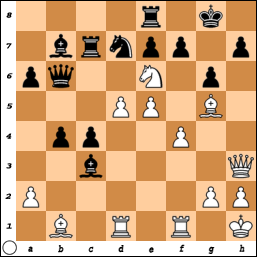 The prosaic 23.Nxc7 maintains an advantage for White, but with Black’s kingside only inhabited by his king, there are much stronger alternatives.

Vovk instead chose the initially more aesthetically appealing 24.Bxg6!?, and after 24…fxg6 (24…hxg6 25.Qh6 forces the line with 25…hxg6 given above) 25.Qh6, Black had to play without his queen after 25…Qxe6. However, he does have two minor pieces and it took almost 30 more moves to bring about resignation. Also winning, but not quite as forceful.

Vovk had another nice effort later in the event against the former World Championship Candidate, GM Kevin Spraggett.

From a King’s Indian, White chose the Saemisch Variation and just played 19.Bf2-e3. Black’s reply is completely thematic, but the finish is nonetheless impressive.

Vovk played 19…Qf6!, maintaining the dark-square control that is so typical in these Saemisch setups. Spraggett didn’t accept the “gift” immediately, but after 20.Rdg1 Ng5, he faces the loss of his f3-pawn if he doesn’t take on f4. Then Black has the dark squares and a material advantage. After 21.Bxf4 Qxf4, though, what is White to do?

One response to “Artists at Work”