Blindfolded Brilliance and Other Views from the Peanut Gallery

The Melody Amber rapid/blindfold tournament is underway in Monaco, and it’s a pretty stacked field: 11 of the top 15 in the world, plus Anish Giri (no scrub himself), are playing. So far Aronian has proved to be the most slippery player, escaping from worse/lost positions in all 4 of his games to score 3.5 points!

As I tuned into the event yesterday, I saw Kramnik played 38…Bf5 to reach the position in the diagram below: 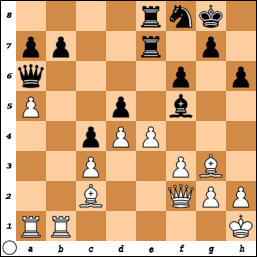 The move made some sense – Black has to do something about White’s slowly advancing center, and …Bf5 forces a decision with the e-pawn. I didn’t have much time to think about what was going on when Grischuk played 39.exf5!!.

But wait, didn’t Kramnik stop that with the threat of …Re2?

Kramnik must have counted on that, but Grischuk demonstrated the real point of his last move with 40.Ba4!. After 40…Rxf2 41.Bxe8, besides the obvious threat to the Rf2, there’s the amusing 42.Bb5, trapping Black’s queen!

After 41…Rd2 (preparing 42.Bb5 Rd1+, which is still worse for Black, but at least playable), Grischuk calmly made luft with 42.h4!. If White can play Kh2, then there is no good response to Bb5. Kramnik tried 42…g6, but after 43.fxg6, the added e6-square is only a small consolation, because the queen can’t go there so easily due to Bf7+.

Grischuk quickly broke through with Re1, and then a planned invasion of the rook to e7 sealed the deal. The brilliant queen sacrifice probably makes it the best game of the 1st round in my view, and Grischuk’s performance is even more impressive considering it came in the blindfold session!

You can’t win them all, though, and despite a 2-0 blanking of Kramnik and a win as black against Gelfand, he was struggling mightily as White in the second half of their mini-match: 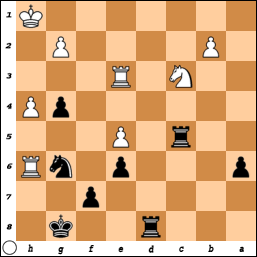 Grischuk’s rook is way offside on h6, and he’s got some weak pawns to tend to. Gelfand’s last move, 36…Rc5, was a very clever ploy to create a wall to keep White’s rook sidelined.

If White plays the natural 37.Rh5 now (trying to get back into play by hitting g4), then Black responds with 37…f5!, when the e5-pawn is pinned in a way – if en passant, the rook on h5 hangs! After 38.Rg5 Kf7, the rook is never going to join the game again. 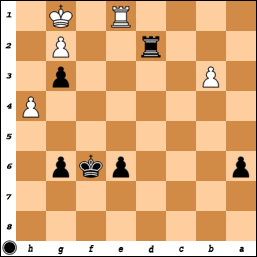 Unfortunately for Gelfand, though, he slipped badly after 43.b3, as he went pawn-grabbing with 43…Rb2. After 44.Kf1 Rxb3 45.Ra1 Rb6, the cage around White’s king has been opened, and so with 46.Ke2 (and a subsequent Kf3xg3), Grischuk gained just enough counterplay to draw the pawn down endgame.

Meanwhile, 47.Ke1 Rxg2 is also a simple win – with two passed pawns and a king supporting them, White’s passed b-pawn is a real afterthought.

Finally, I was playing through a few games from the live TWIC feed of the Reykjavik Open in Iceland. I’m sure there are other good games that were played, but the following one between GM Luke McShane and GM Simon Williams caught my eye. In the following position, an amusing moment arose: 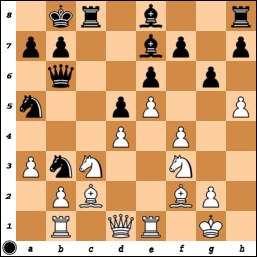 A strange French led to this position where I’m not really sure what Black should be doing (maybe 23…Rg8 is best). White has a slightly more straightforward plan of trying to dislodge the Nb3 (maybe with Re3 and a discovery along the 3rd rank).

That may have led to Williams to find the ridiculous, but also serious try, 23…Na1!?. I’m not sure how often a Black knight ends up on a1 in the midst of a fully populated board without taking any material, but it can’t be too often. Black’s point is that 24.Rxa1 Qxb2 leaves the c3-knight en prise, and if it moves, the Bc2 is next in line.